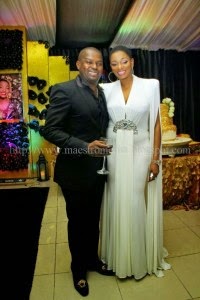 The supposedly serious romance of celebrity writer, Ruth Osime is over. Her Lover and investment banker, Sonnie Ayere has returned to the bossom of his french wife.

Here is how news breaker Lagos Times detailed the development.

'ThisDay’s celebrated Style Magazine Editor, Ruth Osime has been ruthlessly dealt emotional blows by her lover, Sonnie Ayere, who has dumped her to be with his French model heartthrob.


Information exclusively gathered by TLT indicates that things between Ruth and Sonnie, the Chief Executive Officer of Dunn Loren Merrified – a leading investment banking firm – began to take a bad shape few weeks after Ruth’s 50th birthday, which had in attendance the real custodians of power, business leaders and top dignitaries in the economic, social and political sectors of the Nigeria.

While TLT is yet to confirm the real cause of the break-up, insider’s account narrated that Sonnie started putting a gap between him and Ruth when words started flying around that marriage was in the offing between them. Sonnie was said to have been miffed by the story which was all over the internet that he was planning a lavish wedding ceremony with the golden-aged Ruth. He would have none of that, as he already had a woman, a beautiful youth French model in his life, and he was not ready to jettison her for any other woman, no matter highly connected she is.

The true situation of things began to dawn on the author of the now rested “Truth by Ruth’ when calls from him became less frequent. Before then, Ruth’s phones hardly had time to take calls from other friends or business prospects, as they called each other from time to time.

The story changed and the man who dotted on her on the occasion of her 50th birthday started distancing himself. Ruth has since gone quiet about the relationship, as she hardly talks about him these days unlike before.

There are insinuatory reports, scooped by TLT, that Sonnie only made a brief show in Ruth’s life to leverage on his contacts and networks, which vary from public office holders and captains of industries, whom Sonnie needed to boost his businesses.'