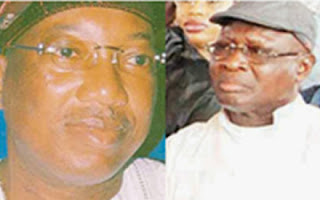 The atmosphere of the Ebute Meta Chief Magistrate’s Court was tense on Tuesday when a former Commissioner for Rural Development and a governorship aspirant of the All Progressives Congress, Tola Kasali, 62, was arraigned for murder.

Arraigned with him were the Special Adviser to the Lagos State Governor on Politics and Legislative Matters, Musiliu Folami, 64, and Kasali’s Chief Security Officer, Tobun Abiodun, 38.

The court was filled with party loyalists, supporters and family members of the accused persons, as many others stood outside the court.

They were arraigned on four counts bordering on murder and unlawful possession of firearms.
The police said the men conspired to kill one Musiliu Lamidi on November 9, 2014, around 2pm at Eko Tourism Hotel, Akodo, in the Ibeju-Lekki area of the state.

The police added that they were found in possession of a pump-action gun, with number 6381, without a valid licence issued by the appropriate authorities.

The corpse of the deceased was said to have been found on the premises of one of the defendants.

Their pleas were not taken by the court for the offences.

However, a senior state counsel, Femi Adamson, who came from the Office of the Attorney General of the Federation, invoked a section of the law to take over prosecution from the police.

He said, “I am a senior state counsel and I want to take over the prosecution of this case. This is pursuant to Section 211 (1b), (2) of the 1999 Constitution of the Federal Republic of Nigeria, as amended.”

The leader of the police team from the legal department of the State Criminal Investigation Department, Godwin Osuyi, said it was not right for the case to be taken from the police since the police had only sought to remand the defendants in custody pending legal advice.

Osuyi, after agreeing to step aside, said, “Before I step aside, I wish to state that they were brought before this court for remand. They have not been formally charged.”

But the court ruled that since the case belonged to the state, it could take charge of it at any time.

The state prosecutor, Adamson, thereafter applied for the remand of the three defendants in custody, citing Section 264(1) of the Administration of Criminal Justice Law of Lagos State, 2011.

However, the leader of the seven-man defence team, Taiwo Ajala, opposed the application for remand.

According to him, there were no allegations before the court, but mere rumours, which should be struck out.

He said, “So far, what are before your honour are not charges, but mere rumours, which have no place in a court of law. These rumours have been elevated to the point of allegations.

“To raise rumours to allegations, one would have expected the prosecution to depose to an oath so that the court can look into it. But this is missing.

“I crave the indulgence of this court to the social standing and circumstances of the defendants. The first is currently the special adviser to this government. The second has a lot of prefixes to his name. He was a former Commissioner for Rural Development. His impacts are felt on our roads. He was also a former Commissioner for Special Duties, while the third defendant had, at different times been a chief security officer of the state. They are all known by reputation.”

Ajala said if the defendants were not granted bail, it would affect the running of the government and the residents of the state.

After making his submissions, the prosecutor said he was not objecting to bail.

“With all due respect, bail is at the discretion of the court and the court is guided by principles. I have come to realise that these are people serving the government of the day in different capacities,” he said.

The Chief Magistrate, Tunbosun Abolarinwa, in his ruling, expressed disappointment in the prosecution for not being able to support the remand application brought before the court.

He said, “What is before the court is a remand application, but the police who brought it have not been able to support same. This is probably why the defence counsel referred to the charges as mere rumours.

“If their movement is restrained, it will bring serious discomfort to them and people associated with them and will be a disservice to the society. This court sees them as people who should uphold the law of the land and the orders of this honourable court.

“This court has confidence in their ability to show up in court.

“The reasons for remand brought by the prosecutions are not reliable and cannot sustain the charges.”

Abolarinwa granted the defendants bail on “self recognition” and ordered the prosecution to verify their addresses and places of work.

The matter was adjourned till December 11, 2014 pending legal advice from the Directorate of Public Prosecutions.