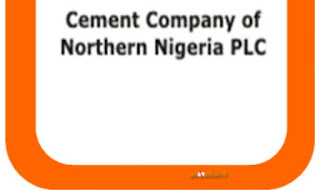 Cement Company of Northern Nigeria (CCNN) producers of Sokoto Cement has reported a net profit of N5.7bn (US$15.75m), 77 percent higher than in 2017 figures and ahead of predictions. This is the first
earnings since its merger with Kalambaina Cement Company.

While the merger was completed in Q4’18, management elected to report the performance of the merged entities as if the merger took place at the start of the year. Thus, whilst Net profit soared y/y, EPS shrunk 83% to ₦0.44, given that shares outstanding jumped over nine times to 13.1 billion units. Management proposed a dividend pay out of 92%, representing ₦0.40/share.
Revenue for the enlarged entity reached N31.7bn; up 62 percent higher YoY and EBITDA rose by 86 per cent to N7.9bn. The impressive topline figure came as a result of increased domestic sales and exports. Overall, CCNN produced 0.76 million MT of cement and sold over 0.74 million MT up 59% y/y.
Interestingly, whilst the sale of cement in Nigeria rose by 49% y/y to ₦28.9 billion, export figures jumped from ₦0.2 billion in 2017 to ₦2.9 billion in 2018. The company's management plans to extend product distribution to the northeast and central regions of Nigeria, as it does not expect the northwest of the country to absorb the company's current, larger 2Mmta capacity.
Furthermore, even after accounting for a rise in depreciation provisions (from the new plant) as well as technical fees and costs related to the merger, EBIT still rose 86% y/y to ₦7.9 billion meanwhile, contrary to expectations, Net finance costs rose 1% y/y to ₦283 million, dragged by lower than expected interest income. Thus, PBT rose 81% y/y to ₦7.6 billion.
There are however predictions that CCNN will record significant upside to its Net income in 2019 and beyond upon approval of Pioneer status by the NIPC and a moderate chance of CCNN receiving approval on the new line.
Cement Company of Northern Nigeria PLC (CCNN) produces and markets cement for various construction purposes in Nigeria. Following a strategic re-orientation, Heidelberg Cement Group (formerly a core investor) divested its CCNN shares in 2008 to Damnaz Cement Company Limited (a Nigerian company). In 2010, BUA International Limited acquired Damnaz Cement Company Limited and became indirectly the majority shareholder in CCNN and its technical partner. CCNN currently operates as a subsidiary of BUA International Limited.