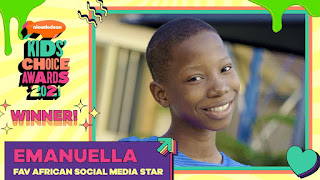 From starring in a viral comedy skit "This is not my real face o" on Mark Angel YouTube Channel - brimming with over six million subscribers, Emanuella has gone on to win several awards on big stages. At this year's Nickelodeon’s Kids’ Choice Awards 2021, she now gets to add a well-deserved orange blimp to her growing collection of internationally recognised awards.

Speaking on this year’s African talents who emerged as winners, Monde Twala, Senior Vice President & GM ViacomCBS networks Africa commented, “Africa is indisputably brimming with talent, and it is such a huge feat to witness two young, talented and inspiring female winners from Nigeria and Uganda emerge triumphantly at the Nickelodeon’s Kids’ Choice Awards 2021!.

At ViacomCBS Networks Africa, we are deeply vested in showcasing African talent on the world stage across our platforms. The youth generation contribute significantly to bringing kids hope, enthusiasm and courage to kids across the continent,” he concluded.

Expressing her delight at receiving the Award, Emanuella said, “I am so happy to be a winner, thank you! To all my fans out there, [I say] thank you. To all those who voted for me, I love you so much, this win would not have been possible without you”. The young star also took the opportunity to urge viewers not to “forget to stay safe”. “Always stay at home and remember to clean your hands with alcohol-based hand sanitisers. We love you so much”, she added.

Uganda’s Vanessa Nakate, who was recognised with the Africa Together For Good' award, for her efforts in promoting climate justice pledged to “continue educating the society about the effects of climate change”.

Other major highlights from Nickelodeon’s Kids’ Choice Awards 2021 include:

Special remarks from Vice President of the United States Kamala Harris, introduced by actress Jennifer Garner, as part of the show’s Generation Change presentation, which recognized kids’ strength and courage to create a better world for future generations;

Performances by Grammy® Award-winning global superstar Justin Bieber of his chart-topping hit “Intentions,” joined by Quavo and introduced by Hailey Bieber; and a medley of his latest singles, “Hold On” and “Anyone;”

Setting a Guinness World Record for the most simultaneous slimings;

Live and interactive fan walls showcasing families at home, with a special KCA award presented to one lucky family that was chosen during the show;

TOGETHER FOR GOOD (AFRICA)

FAVORITE VOICE FROM AN ANIMATED MOVIE