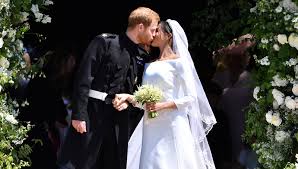 Prince Harry and his wife Meghan Markle tied the knot in secret three days before the official royal ceremony, Meghan revealed during her highly anticipated sit-down with Oprah Winfrey.⁣⁣⁣

Oprah asked Meghan what she was excited about in her new life (i.e. post-working royal life), and the Duchess replied, “Just being able to live authentically… it’s so basic but it’s really fulfilling.”⁣⁣⁣

She continued, “I was thinking about it, you know our wedding—three days before our wedding, we got married,” she said, revealing that they swapped vows in private before Archbishop of Canterbury Justin Welsby ahead of the televised spectacle on May 19, 2018, at Britain’s Windsor Castle.⁣⁣⁣

“No one knows that. We called the Archbishop and we just said, look, this thing, this spectacle is for the world. But we want our union between us, so the vows that we have framed in our room are just the two of us in our backyard with the Archbishop of Canterbury.”⁣⁣⁣