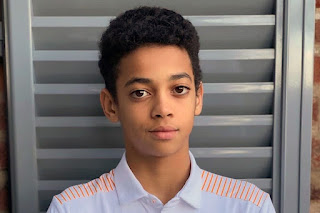 “McLaren Racing today announced that it has signed a long-term agreement with Ugo Ugochukwu, the promising young driver from the USA, who was recently crowned FIA European karting champion,” McLaren said in a statement on its website.

“The 13-year-old American has proven to be a revelation, already securing several titles in his young career in the US and Europe, and most recently winning the 2020 FIA OKJ European Championship.”

Ugochukwu is the son of former Face of Africa winner Oluchi Onweagba-Orlandi.

Mc Laren further explained that the agreement will provide the team with an option on Ugo’s services in the future, while supporting his development and evolution as he progresses through the junior categories of motorsport.

“We’ve been watching Ugo’s progress with interest, so when the opportunity to sign an agreement with him became available, we had no hesitation moving on it,” CEO, McLaren Racing, Zak Brown said.

“Now we’ll focus on giving Ugo the right support when he needs it to help him fulfil his potential.”

The motor racing team principal Andreas Seidl hailed Ugochukwu’s acquisition, saying that it was in line with McLaren’s approach to identify and support young talent.

Seidl said though Ugo is still early in his career, it is clear he has the ingredients to be successful in the sport.

“This signing reflects our refocused approach to identifying and supporting new talent, away from a formal young driver programme to a more tailored basis,” Seidl said.

The young chap also appreciated the team on his signing as one of its racing stars.

“I’m honoured to be signed by such an iconic team as McLaren Racing so early in my career,” Ugo said.

“To have the support of McLaren is fantastic and what any young driver dreams of. I’m focused right now on developing as a driver and racer, so having McLaren by my side can only help me on and off the track.”

The Chairman of Nigerians in Diaspora Commission (NiDCOM) Abike Dabiri-Erewa also congratulated the young chap on Twitter on Monday.

“Congrats to 13-year old Ugo Ugochukwu, son of Super model Oluchi Onweagba as he becomes the first Nigerian to win a world karting championship, and get signed by McLaren to race in Formula 1 when he grows older,” Dabiri-Erewa said.