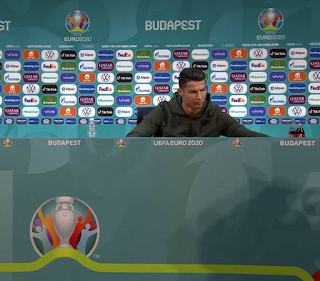 Portuguese soccer superstar Cristiano Ronaldo removed two bottles of tournament sponsors Coca-Cola away from him as he entered a news conference on Monday (June 14) before holding up a bottle of water to the media, dismissing the famous sugary drink.

Ronaldo has built a reputation as one of the hardest workers in the game, taking his fitness obsessions to another level in order to push his top playing days well into his 30s.

In a move likely to anger the sponsor, the Juventus and Portugal forward glanced to the side before moving two glass bottles away from his position and saying "drink water" to the media while his microphone was still turned off before disapprovingly saying: "Coca-Cola!".

Ronaldo was at a news conference to preview the opening match of the reigning European champions Portugal as they kick off the 'Group of Death' when they face Hungary on Tuesday (June 15) in a group that also includes European heavyweights France and Germany.

A study published in the BMJ British medical journal in 2019 analysed data from 101,257 French adults - 21% of them men and 79% women - and assessed their intake of sugary drinks. It followed them for a maximum of 9 years, between 2009 and 2018, to assess their risk for all types of cancer.

The results showed that a 100 millilitre (ml) a day increase in consumption of sugary drinks was linked to an 18% increased risk of overall cancer and a 22% increased risk of breast cancer, although the study did not establish a causal link.

Consumption of sugary drinks has risen worldwide in the last few decades and is linked to obesity, which itself increases cancer risk. The World Health Organization recommends that people should limit their daily intake of sugar to less than 10% of their total energy intake, but also says a further reduction to below 5%, or about 25 grams a day, would be healthier.

Email ThisBlogThis!Share to TwitterShare to FacebookShare to Pinterest
Labels: Ronaldo