How Lionel Messi’s PSG shirt sold out in 30 minutes 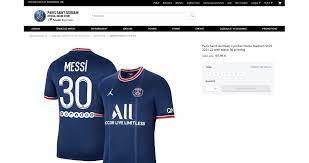 Lionel Messi’s Paris Saint Germain’s jersey was sold out in 30 minutes after the football club displayed them for sales on its website.

Earlier, the club released a statement describing Messi as a legend.

“Paris Saint-Germain are very happy to announce the signing of Leo Messi to a two-year contract, with an optional extra year.

“The six-time Ballon d’Or winner is considered a legend in his sport and a true source of inspiration for all generations, on and off the pitch.

“The signing of Leo reinforces the ambitions of Paris Saint-Germain and offers loyal Club supporters an exceptional team, which promises to bring incredible football moments to life in the years to come,” the club said.