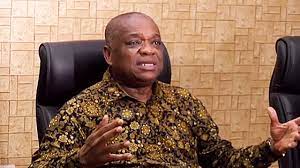 The trial judge, Justice Inyang Ekwo gave the order while delivering judgment in an application filed by the former governor seeking an order of the court prohibiting the Federal Government through the EFCC from retrying him on a charge for which he had already been tried and convicted.

the said applicant having been tried, convicted and sentenced by the judgment of this court dated Dec. 5, 2019, by Justice M.B Idris.”

Justice Ekwo held that since Kalu was not mentioned in the judgment of the Supreme Court, which voided his earlier conviction and sentencing and ordered a retrial, the judgment did not apply to him.

Justice Ekwo ruled that it was only the former Commissioner of Finance in Abia Government House, Jones Udeogu, that could be re-tried as only his name was mentioned in the Supreme Court judgment.

The judge rejected the argument of the prosecution that having benefited from the judgment of the Supreme Court, Kalu and his firm could not claim the order for retrial would not apply to them.

Kalu was charged alongside his frim, Slok and Udeogu, and while the duo were convicted and sentenced for 12 years, the company was wound up.

Udeogu, however, appealed the judgment and the Supreme Court set aside their trial and conviction in a judgment on May 8, 2020, on the grounds that the trial judge, having been elevated to the Court of Appeal, ought not to have continued to hear the case.

In the judgment given in an appeal, marked: SC/62C/2019 filed by Udeogu, the Supreme Court ordered a retrial in the case.

Kalu, who is the Chief Whip of the Senate representing Abia North Senatorial District argued that he had already been tried, convicted and imprisoned and the constitution provides that one could not be tried twice on the same charge.

Kalu’s counsel, Prof. Awa Kalu, SAN, while adopting his processes had informed the court that Kalu stood for trial for 12 years and got the judgment that convicted and jailed him for 10 years.

The senior lawyer cited Section 36 (9) of the 1999 Constitution which provides that no Nigerian shall be subjected to double jeopardy to support his arguments.

The lawyer insisted that the former governor, having served time in prison, would be made to suffer double jeopardy if the court ordered the EFCC to retry him.

In an interview with newsmen, Awa Kalu said that the judgment was a victory for the law.

For his part, the EFCC counsel, Mr Oluwaleke Atolagbe wondered why Kalu would benefit from the Supreme Court judgment while Udeogu would not benefit from it.

Atolagbe said that he would consult with his employer to know the next cause of action, he, however, added that an appeal was not off the table.