The United Bank of Africa (UBA) has published the names of customers the bank said received foreign currency under false pretense and have since refused to return the money. 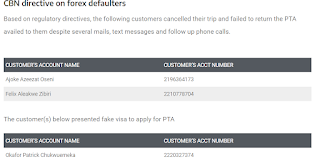 The release of three names on the bank’s website followed a central bank directive for banks to publish the names of forex defaulters as part of its efforts to clampdown on arbitrage that has helped push the value of naira to an all-time low on both the official and parallel markets.

The Central Bank of Nigeria on August 31 said the directive was prompted by reports of sharp practices by some unscrupulous customers to circumvent its new policy on the sale of forex for overseas personal and business travel.

According to a circular addressed to all banks on Tuesday, and signed by the bank’s Director, Banking Supervision Department, Haruna Mustafa, the fraudulent practices include the use of fake visas and cancellation of air tickets after purchase of Personal Travel Allowance and Business Travel Allowance.

“This trend, if not curbed, portends risk to the integrity and stability of the forex market,” CBN said.

“Consequently, further to the various measures already put in place, all banks are hereby directed to publish on their websites the names and BVN of defaulting customers who present fake travel documents or cancel their tickets and fail to return the purchased PTA/BTA within two (weeks) as stipulated in the customer declaration form signed by them.”

In July, the apex bank ended the sales of forex to Bureau De Change operators, saying the parallel market had become a conduit for illicit forex flows and graft, it then directed all forex transactions to the commercial banks.

UBA said two of the names it published cancelled their trip and failed to return the PTA availed to them despite several mails, text messages and follow up phone calls.

The third customer “”presented a fake visa to apply for PTA”, it said.