"We deserve to be here" - first woman to referee AFCON match 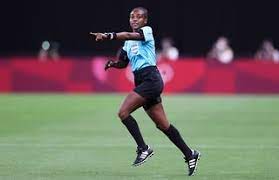 Rwandan referee Salima Mukansanga, who became the first woman to officiate an Africa Cup of Nations match when she took charge of the Zimbabwe vs Guinea match this week, on Friday said she and her female colleagues earned and deserve their place as match officials at the highest levels.

"back home we have been working very hard because a lot (of people) say, 'women can't at the pace of men and the speed or whatever'. Yes, we can't be men, but we can do our best to be on the same level," she said.

The 33-year-old was speaking at a news conference in Douala after a training session for all AFCON match officials.

Mukansanga also said it was an honour and a privilege to have refereed a game during the Confederation of African Football's most important tournament, paving the way for more African women referees.