The Lagos Visionscape Garbage Scandal and Attempts at a Cover-up 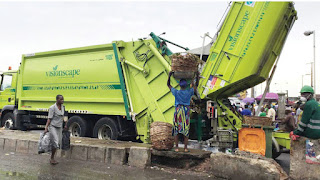 It is perhaps a scandal that Lagos taxpayers are still paying for the misadventure called Visionscape some four years after the controversial waste management firm unceremoniously exited operations in the state.

The Lagos State Government in its capacity as the Sponsor/co-obligor on Visionscape’s N28.47 billion of 5-year bonds issued at 17.5 percent, and due in 2022, has been making monthly payments of N713.7 million into its irrevocable sinking fund accounts backing the bond.

The fund is then used to settle semi-annual coupon payments of N4.28 billion due to Visionscape bond investors such that all Visionscape debt service obligations have been met by Lagos since 2018, sources tell MoneyCentral.

The interest payments are set to continue until maturity of the bonds in September 2022, redemption of which will likely fall on the balance sheet of the Lagos State government.

That’s a great deal for the lucky high net worth individuals and investors being paid on behalf of a company that ceased operations in 2018.

Not so much for Lagos State taxpayers and residents who have endured shoddy garbage disposal and what insiders say is a corrupt deal enabled by poor governance in Lagos.

“The Visionscape deal was rotten to the core from the beginning and couldn’t pass the simplest procurement smell test,” a source familiar with the inner workings of the deal told MoneyCentral.

“So why was it eagerly pushed by the former Lagos State Governor Ambode and why has the current Governor Sanwo-Olu refused to probe those that fleeced the state?”

MoneyCentral was able to get in touch with 2 former expatriate workers of Visionscape who described a dysfunctional company that was ill equipped to handle the garbage disposal needs of a mega city of 21 million people.

“Visionscape did hire a CEO and COO who both had Waste Experience and a few chosen expats that had some Waste experience. However, the purchasing, funding, accounting, marketing were all cronies, personal friends, college friends of the Chairman Adeniyi Makanjuola with limited business experience,” the source told MoneyCentral.

The Lagos State Government then awarded contracts to the Visionscape Sanitations Solutions limited and its strategic partners for deployment of waste management infrastructure.

“The concept was great, the thought process non-existent and the people of Lagos were once again literally picking up the trash of an abusive self-serving Government and their cronies,” a second source, and former expatriate staff of Visionscape told MoneyCentral.

“The leaders of Visionscape had no experience of the Garbage Industry nor did they have any existing contracts when they entered their agreement with the City of Lagos.”

When Visionscape was handed the garbage disposal contract, Lagos generated 14,000 metric tons of garbage each day.

Meanwhile a garbage truck can haul 10 to 15 metric tons, which means Visionscape needed to operate 1,120 garbage trucks every day hauling an average of 12.5 metric tons to keep current with waste generation.

If any of the 1,000 plus needed trucks were to break down it means you are now behind a route, the source explained to MoneyCentral.

Visionscape however operated only 49 Route Trucks each day (insiders tell MoneyCentral) and 14 tractor heads with trailers, to transfer the loads out to the dump site, meaning they had zero chance for success. 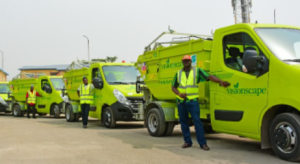 When Visionscape launched its N20.3 billion (Series 1 tranche A) 5-year bond in 2017, it claimed in the information memorandum (a document produced prior to selling a bond, and essentially functions as an opening pitch to any prospective buyers/investors) that about N16.3 billion of the bond proceeds will be used to acquire fleet for transfer loading stations, strategic acquisitions and related infrastructure, expected by September 30, 2017.

MoneyCentral cannot establish that any of that infrastructure was ever procured meaning most of the proceeds of the bond are unaccounted for as Visionscape essentially shut down operations the following year, following the unexpected exit of Governor Akinwunmi Ambode, who lost his bid for a second term in office to fellow APC party member, Babajide Sanwo-Olu at the primaries in October 2018.

Soon after Ambode’s loss, Simon Reading, Chairman of the Board of Investors of Visionscape explained why the company was shutting down its operations.

He said the decision was reached following “heightening political tension in the state” and reported cases of attack on its employees, destruction of its operational vehicles and equipment.

“Of utmost concern are the recent developments surrounding the turbulent political environment wherein it was reported that the opposition in the upcoming gubernatorial race used subversive language about the residential collections contract and called it a misadventure,” Reading said then.

Calling Visionscape a “misadventure” is probably an understatement.

The Lagos state government claimed it took over Visionscape assets (procured with the bond proceeds) and the outstanding liabilities, once Visionscape ceased operations, as a justification for the State to continue paying bondholders from the state’s budget.

GCR Ratings, which rates the bonds of the Special Purpose Vehicle (SPV) – the Municipality Waste Management Contractors Limited (MWMCL), created by visionscape (for the bond issuance) however said in October 2021 that there was a lack of “documentary evidence supporting the transfer of the assets of Municipality Waste Management Contractors Limited to Lagos State.”

The reason for that may not be unconnected to further alleged unwholesome acts accompanying the shutting down of Visionscape.

“When Visionscape closed, its trucks were leased to the Lagos State Waste Management Agency (LAWMA) at huge prices. The financial books were cooked, fried, toasted, grilled each day. I am not quite sure if there were two sets of books or three,” one of the former expatriate staff told MoneyCentral.

“There were so many Internal failures within Visionscape that the people of Lagos would never understand unless it was written about,” he said.

A few examples were as follows, according to information passed across to MoneyCentral.

The whistleblower informed that trucks were purchased for one price then sold Internally to Visionscape for a marked-up price. Expatriates meanwhile were responsible for paying their own payroll taxes to their country of origin and not to Nigeria.

When homes were leased for expats they were often done at overvalued market prices and many small vendors were never paid although invoices were submitted to Lagos State for payment.

Monies from Lagos may have also been funneled into Dubai Companies and other European businesses that ended up failing.

Between 2018 and 2019, Makanjuola the former Chairman of Visionscape was named as a Director in 8 companies incorporated in the United Kingdom (U.K).

Seven of the companies have today folded up/dissolved, while one is dormant, according to data from Endole, an aggregator of corporate data from both public and private sources which maintains a database of over 7 million companies that covers the entire UK.

“The new insights into the accounting surrounding the Visionscape project highlight yet again the opacity of the finances of Nigeria’s biggest subnational economy,” Ikemesit Effiong, Head of Research at SBM Intelligence, told MoneyCentral.

Analysts say that Lagos, despite a surge in revenue collections largely built on the back of arguably the country’s most sophisticated taxation regime, has historically been reticent to publicly disclose how public finances are managed.

Furthermore, while tax enforcement and compliance are high by Nigerian standards, probes and investigations into possible financial misappropriation are unheard of.

“In essence, the issues arising from the evolving Visionscape’s story is emblematic of and is perhaps the most vivid illustration of business as usual in 21st Century Lagos,” Effiong said.

If the Lagos state government has been recalcitrant to investigate the visionscape deal through the office of its Attorney General (Ag), the Federal Government through the Economic and Financial Crimes Commission (EFCC) has also chosen to play ostrich and turn a blind eye.

A legal luminary who spoke to MoneyCentral on condition of anonymity due to the sensitive nature of the topic said the fact that no one has been probed for the visionscape scandal, confirms a lack of political will by Nigeria to get tough on sleaze.

“In the US the Feds would have probably swooped in to clean house with a couple of indictments dished out, if the State Ag refused to do its job,” he said.

“But it’s par for the course for Nigerian politicians who today are snapping up N100 million presidential expression of interest forms, with nobody questioning the source of those funds.”

Technically, the EFCC is a federal agency with wide investigatory powers over matters involving financial misappropriation in Nigeria but there is an open-ended legal question about its jurisdiction over such issues where they involve state-backed and state-managed corporations and institutions.

This has stopped it from opening investigations into the financial practices in a number of Nigerian states in the past.

Unlike the U.S Watergate scandal where the crime was bad but attempts at a cover-up made it worse until it was brought to light, the hapless people of Lagos have no advocate in their corner providing oversight over the wheeling and dealings of the tiny but powerful elite that run the affairs of the city of 21 million people.

“The EFCC is hardly an independent investigative body and it often cherry-picks the cases it takes up depending on the political will it is able to secure from the ruling authorities. It appears in this case that the absence of the requisite political will to ask hard questions about this company (visionscape) is the primary reason why there has been little movement on this issue,” Effiong of SBM Intelligence, said.