Why I lost PDP primary in Kogi -Dino Melaye 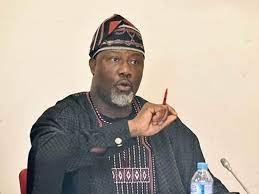 Former Senator, Dino Melaye, has blamed gang-up against him for his loss at the primary to elect the senatorial candidate for Kogi West on the platform of the Peoples Democratic Party.

Yusuf beat Melaye in the re-run election to pick Kogi West Senatorial ticket on the platform of the Peoples Democratic Party.

The election, held on Monday, had ended in deadlock as both aspirants scored 88 votes respectively.

However, during the runoff election on Tuesday, Yusuf scored 163 votes while Dino Melaye scored 99 votes, denting Melaye’s hope of returning to the Senate in the 10th National Assembly.

The Returning Officer, Stephen Onoji, announced the result on Tuesday.