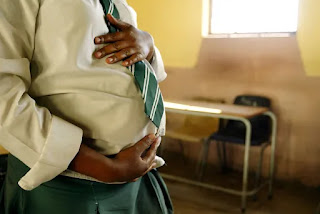 Like most women, Serena Phaka's life was upended when she became pregnant, as the thought of balancing her education with mothering led to panic and seemed daunting. But unlike most, she was only 15 years old.

Educators say lack of sex education and counselling has fueled the problem, which causes many girls to drop out of school and prolongs the cycle of poverty.

Now 17 and mother to another child, Serena, who lives in the east Johannesburg township of Tembisa, said she would not have known what to do without her family's support.

“Without my parents support, I wouldn’t be here, cos most of the time they’re the ones who help me in making decisions, in doing all the duties, parents’ duties, whenever I am unavailable. So, they having my back and they make me have more knowledge and what to do when I encounter such situations,“ she said.

Unlike many girls in her situation, Phaka continued going to school while pregnant, and has been able to continue her education, thanks to the support of her parents.

Her mother Rebecca said she struggled with the news of her pregnancy at first, but is focused on the future.

“I was so angry, a lot, because I was looking something different about Serena, not for the baby right now. But all in all, I used to council myself, no, is done, is done, let me stood up with her,“ said Rebecca.

More than 90,000 births between April 2021 and March 2022 were from teen mothers, with some as young as 10, according to the South African government.

Actual figures may be even higher as not all births are registered.

Many people still consider sexual and reproductive health a taboo topic, and some parents have resisted the introduction of sex education in schools, educators said.

"We are seeing the consequences of not having sexuality education," said Mugwena Maluleke, the general secretary of the South African Democratic Teachers Union.

However, thanks to her mother's encouragement, Serena has managed to stay in school, and says she understands her responsibility to secure a future for herself and her children.

“I do miss my freedom, and sometimes wish things never did happen. That I never had child, but, sometimes I do console myself and be like, you know, things do happen with a purpose, so, yeah , I’m ok not having my freedom, and I ‘ve made peace with that," Phaka added.