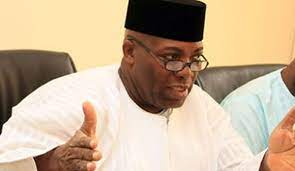 Doyin Okupe, former Senior Special Assistant on Public Affairs to Ex-President Goodluck Jonathan, and chieftain of the Labour party is to spend two years in prison following his conviction on December 19, 2022 by Justice Ijeoma Ojukwu of the Federal High Court Abuja.

In a well-considered judgment, the trial court held that the Economic and Financial Crimes Commission, EFCC, successfully established its case against Okupe,that evidence before it established that the defendant had in the discharge of his official duties, accepted cash payments that were above the statutory threshold, without recourse to a financial institution.

It was alleged that Okupe received funds from the office of the National Security Adviser, NSA, which he could not account for. He was convicted and sentenced to two years imprisonment on counts 34 to 59.

The charges are centered on accusations of receiving various sums ranging from N10million in different occasions from 2012 to 2015 from ONSA when he was senior special assistant on public affairs to former President Goodluck Jonathan.

The court however gave the defendant an option of N500,000 fine on each of the counts.