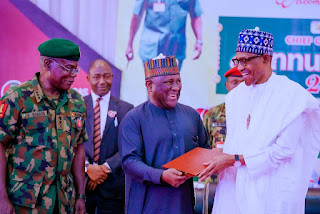 President Muhammadu Buhari was on hand to present yet another award to the Chairman of BUA Group, Abdul Samad Rabiu today at the instance of the Nigeria military.

The event was the Chief of Army Staff Annual Conference which

The Army used the occasion to honour some Nigerians with Recognition Awards for their support. Chief among them was the BUA Group Chairman and founder of ASR Africa Initiative,  Abdul Samad Rabiu.

It was the fourth recognition to be presented by the President personally to the BUA Group founder in less than a year.

Earlier in the year, , specifically in May, he was honoured with the Nigeria Productivity Awards, after which he was presented with a national honour as a Commander of the Federal Republic, CFR.

Then in October, he was again presented an award, this time Nigeria Excellence Award in Public Service for philanthropy and interventions in education. Curiously at the last award, he was the only Nigerian drawn from the Public sector found worthy of such honour.

Speaking at the Chief of Army Staff Conference, the President, Muhammadu Buhari directed the military to remain apolitical and continue to operate  within the framework of the constitution to ensure the successful conduct of 2023 elections.

He also urged the Army to continue to improve to their human rights obligations during operations in line with global best practices.