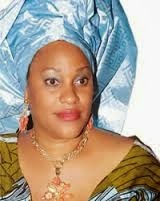 The social media is agog with borderline reactions. And the immediate cause of this latest frenzy is the latest appointment by President Goodluck Jonathan.

The nation's number one man has appointed Roli, the beautiful wife of clawing back to relevance party man, Chief Bode George as the boss of
revered agency and nemesis of drug peddlers, NdLEA ( national Drug Law Enforcement Agency).

The appointment which takes immediate effect was made in the thick of outcry and allegations the presidency had a hand in denying serving governors and party chieftains of rival party, entry and attendance at a political rally of one of their own seeking to retain his seat, Governor John Kayode Fayemi of Ekiti state.

'Roli's appointment was made in a manner seemingly meant to swept under a supposedly more pressing public interest' a source claim.

However inspite of the ploy, the action which is politically interpreted as testaments of Bode George's continuing return to influence has continued to attract flaks and related borderline reactions across the social media.

Here are some reproduced below

'
Anonymous said...
A big miss o....Can Goodluck ever get it right??? The man is so fucking dumb.Roli Adeniyi, DG NDLEA???? How on earth is she qualified for this position?? Cos she was Chris Okotie's former Fuckmate? Yes, she was Chris Okotie's babe...Big time. Or Cos she is wife number X to an ex-convict that robbed us blind???? Reuben Abati, please tell ur Jonathan to stop playing politics with sensitive posts cos he wants to win the 2015 elections at all cost....I weep for Nigeria....RIP my dear country.
'
coco Arielle said...
GEJ sure has a thing for beautiful women . But what's her qualifications to hold this sensitive post? wldnt be surprise if I wake up tomorrow to hear Abacha's son is the new minister of Finance. Can't wait for 2015 election to be over.
'
Queen Bee said...
Ok so,whats her qualification to warrant dis sensitive postion?will she be firm enuf to fight drug trafficking or she will let it thrive?its not by beauty jare Stella....btw I notice Oga Jona doesn't forget' to appoint beauriful' women into very sensitive portfolios dat will always warrant direct contact with him.hmmmm#he really must have affinity to beauty,well i hope dats all to it#rme#
'
N.Dr. Agwoturumbe said...
Now, Nigerians can get as much drugs as they want. What the heck LEGALIZE IT.
'
Atari Ajanaku said...
I don't have anytin against Roli but putting a square peg in a round hole buy why Presido GEJ
'
Ramson Jay said...
I hope and pray she will not misappropriate funds and end up in KIRIKIRI prison like the husband. GEJ is really strategising for 2015 o.
'
WIDE EYED! said...
What's her professional background again? Political compensation should not be the deciding factor for the operative head of an agency of that magnitude! Mr president,there is a drug war to be won. This woman is more or less a social butterfly. Some of her affiliates on the party scene are poping champagne right now! Need I tell you why? Who else remembers the Fidelis oyakhilomen and jennifer Madike Saga? Congratulations are not in order. This is a miss!'