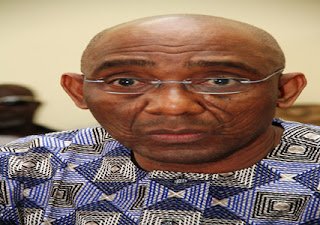 He was reportedly nabbed at his Ikoyi Lagos home on Saturday by operatives of the Economic and Financial Crimes Commission.

Here are the interesting details

Outdoor giant Afromedia is battling to handle its most difficult brief ever — how to retrieve a fortune invested in a phoney deal.

The Economic and Financial Crimes Commission (EFCC) is helping.

The anti-graft agency has arrested a Lagos businessman, Alhaji Mohammed Gobir, for allegedly defrauding the foremost outdoor advertising company of cash estimated to be N1.7 billion in various currencies.

Gobir was picked up at his Ikoyi home and put in detention.

“Gobir, a 55–year-old father of two, was picked up by EFCC operatives  early Saturday at his Ikoyi residence and is still being interrogated at the Lagos office of the anti-graft agency.

“The suspect allegedly defrauded the advertising company through a phoney investment deal.

“The suspect was allegedly introduced to Afromedia sometime in 2008 by their private placement consultants, Synergy Capital Advisory Limited, as a high networth investor who was willing to inject N1,000,000,000 into the company, through the acquisition of shares.

“Based on his touted pedigree as potential investor, Gobir cozy up to the management and in no time became chairman of the Business Development Committee of the board of directors of the company, a position which he later used to defraud the company.

“Having earned the trust of the company owners, Gobir started demanding large amounts of money, which he termed as business expenses to international consultants, Royal Exchange Burue in the United Kingdom in order to facilitate and secure investments from his bank in the UK, Natwest Bank London.

“The company gave Gobir  $1,000,000 in cash and paid for his travel expenses on a first class return ticket to UK where he would meet with the purported investors, which investigation later showed never existed nor were the meetings ever held.”

The commission said the fraud was uncovered when the group managing director of Afromedia followed Gobir to London on a business trip.

The source added: “On one good day after the suspect had collected several amounts of money and made several trips to the UK to meet with the purported investors, the group managing director of Afromedia accompanied him to the UK for another round of meeting ostensibly to close the deal.

“But as soon as they landed in the UK, Gobir made a telephone call in which his travel companion overheard him scream aloud, saying his assets were seized by UK anti-money laundering authorities.

“He even showed the GMD an email sent to him for the alleged seizure.

“The suspect confessed to  the MD of Afromedia that his money( $250,000,000) was seized by the British authorities five years earlier for alleged money laundering and that he was currently financially handicapped and he needed a bailout of $3,817,000 to get the European Union Money Laundering Waiver Certificate.

“The suspect later presented a “waiver certificate”, to the company and promised to pay them the monies he had collected.”

The Head of Media and Publicity of the EFCC, Mr. Wilson Uwujaren who confirmed the arrest, said investigation into the scam continued.