There is a live drama playing out in the family of the Udensi Ifegwus. 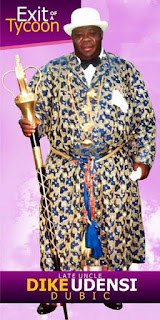 Daughter Nnenna claims that her mother and society Lady Joy Udensi’s marriage certificate is a forgery!.

And she has dragged the police into the matter that has her late father’s estate at stake.

Here are the full details

A former chairman of defunct Citizen Bank Limited, Lady Joyce Udensi Ifegwu, has urged the Federal High Court in Lagos to determine whether the police can investigate an allegation of marriage certificate forgery against her twice.

She wants the court to determine whether the Police is still entitled to investigate her, after men of the Zone Two Command headquarters, Onikan had concluded investigation on the the subject.
Inspector-General of Police, Commissioner of Police, Special Fraud Unit, Ikoyi and Inspector Justus Ogar are the respondents

Ifegwu’s daughter, Mrs Nnenna Enweliku, had petitioned the Assistant Inspector-General of Police, Zone Two last January 27, alleging that her mother was not legally married to her father and that the marriage certificate she presented to obtain a letter of administration for her late father’s estate, the late Chief Dike Udensi Ifegwu, was forged.

Dissatisfied with the outcome of the investigation, she wrote a second petition to the Deputy Inspector-General of Police, Criminal Investigation Department, Abuja.

As a result, the police initiated fresh investigation of the allegation, following which the applicant filed the suit seeking to halt her possible arraignment over the allegation.

Lady Ifegwu is praying the court to declare that the defendants lack the power to investigate allegation of forgery of marriage certificate against her for a second time. She said a suit pending in High Court of Abia between her and three others against the probate registrar and seven others dwells on the issue.

Her suit is supported by 37-paragraph affidavit where she swore that she was lawfully married under the Marriage Act, Native Law and Customs to the late Udensi Ifegwu until his death on July 18, 2012. She averred that they had eight children, including the petitioner who is her first child.
“After my husband’s death, one of my children namely Mrs Nenna Enweliku (nee Dike Udensi) petitioned the Nigerian Police at Zone 2 Command alleging that I was not lawfully married to her father and that I forged the marriage certificate evidencing my marriage to my deceased husband. On the strength of the petition, I was by a letter dated July 7, 2014 summoned to the Zone Two Command headquartes Onikan, Lagos,” she stated.

She added that she made statements on how her late husband misplaced the original marriage certificate obtained at Aba Local Government marriage registry in 1978.

“In the course of being interrogated by the third defendant, I was informed by him that another petition was written to the second defendant to by daughter on the same subject of allegation of forgery which had earlier been investigated by officers of Zone Two and which is also a live issue in the suit pending at the High Court of Abia State.

“On August 18, 2015, I was summoned by the third defendant to his Milverton Road, Ikoyi office. During the meeting, the third defendant informed me that he has established that my marriage certificate was forged and that unless I withdraw suit No. HU/159/2013, which I instituted at the Abia State High Court, he will make sure that I face trial for forgery with maximum publicity given to my arraignment and trial,” she swore.