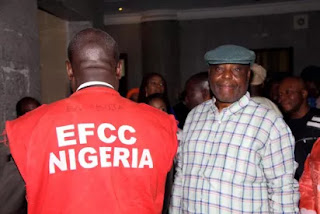 The Abuja Division of the Federal High Court has granted the former Chairman of DAAR Communications Plc, ‎High Chief Raymond Dokpesi‎, bail to the tune of N400milion.


In a ruling this afternoon, trial Justice Gabriel Kolawole ordered Dokpesi who is facing a six-count criminal charge, to produce two sureties who must deposit N200m each
The court stressed that one of the sureties must be a public servant, either serving or retired, not below the level of a Director, adding that the second surety may be an entrepreneur who must submit three years tax clearance.
Justice Kolawole held that either of the two sureties must tender title deeds of a landed property in any part of Nigeria, the value of which must not be below N200milion.
The sureties, the court said must depose to an affidavit of means, submit two recent passport photographs to the Deputy Chief Registrar, DCR, Administration, of he high court.
Dokpesi further directed to surrender his international passport, “If already in custody of the EFCC, it should be delivered to the ‎DCR of the Federal High Court in charge of Litigation”.
Meanwhile, Justice ‎Kolawole ordered that Dokpesi should be remanded in prison custody pending the perfection of the bail conditions.
‎It will be recalled that Dokpesi who is a chieftain of the Peoples Democratic Party, PDP, was arraigned before the court on December 11, over alleged N2.1billion fraud.
He is facing trial ‎alongside ‎his firm, DAAR Investment and Holdings Ltd, owners of African Independent Television, AIT, and Raypower FM.
Specifically, EFCC, in the charge signed by its Deputy Director, Legal and Prosecution, Mr. Aliyu Yusuf,‎ alleged that Dokpesi received about N2.1billion from the office of the National Security Adviser, NSA, for PDP’s ‎presidential media campaign.‎
‎
According to the charge, the funds were released to the accused persons ‎between October 2014 and March 19, 2015.
The funds were allegedly transferred from an account the ‎office of NSA operated with the Central Bank of Nigeria, CBN‎, to a FirstBank‎ of Nigeria Plc‎ account owned by DAAR Investment and Holding Company Limited‎
‎
The prosecution maintained that the transaction was in breach of ‎section 58 (4) (b) of the Public Procurement Act 2007 and punishable under section 58 (6) and 7 of the same Act, as well as under section 17 (b) of the EFCC Act, 2004.
Dokpesi had since pleaded not guilty to the charge, even as the court slated February 17, 18 and March 2 and 3, 2016, to begin full-blown hearing on the matter.