Inside Details Of The Troubled Life Of OANDO Chief Executive Officer, Wale Tinubu 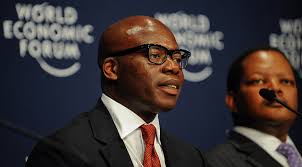 According to
AfricaEnergyIntelligence, a posse of Oando’s shareholders are making the company CEO Adewale Tinubu’s life very difficult. Bought by Oando in 2012 for $1.5 billion, ConocoPhilips‘ assets in Nigeria are now causing the company serious headache. Several of the financiers that lent money to Oando to finance the purchase have concerns over the way the company is being run.

These investors include leading names of the Nigerian economy. At the top of the list is Gabriele Volpi, founder of the lucrative oil logistics firm Intels/Orlean Invest, which enjoys a near monopoly in the Niger Delta region, as well as in Angola and Mozambique.

The other financier behind the ConocoPhilipps operation is well-to-do businessman Alhaji Dahiru Mangal. Mangal, who is from the northern state of Katsina, is active in oil exploration, transport and distribution in Niger and Nigeria. He is a close friend of Tanimu Yakubu, former economic advisor to late president Umaru Yar’Adua (2007-2010). Yakubu has been on the board of Oando since 2015. All these men are also from the Katsina region, as is current Nigerian president Muhammadu Buhari.

Oando’s third financial backer for the ConocoPhilips operation is former Nigerian vice president Atiku Abubakar (1999-2007), who has also invested in Intels. Abubakar, who comes from the northern state of Adamawa, ran for the ruling All Progressives Congress (APC) party primaries. He lost out to Buhari, who was chosen as the presidential candidate for 2015. The former vice president is actively preparing for the next general elections in 2019.

Oando’s group chief executive Adewale Tinubu has been moving every muscle to improve the company’s share price, but this is no easy task. Servicing the debt created for the ConocoPhilips purchase is seriously handicapping the company’s operations, exacerbated by a continued lull in crude prices. Making matters worse, a large chunk of the American firm’s assets are in gas, a resource harder to make profitable in the current Nigerian context. When contacted, Oando did not wish to comment.-