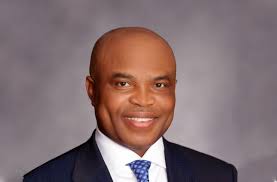 The first building to be completed in Nigeria’s cutting-edge city of the future, Eko Atlantic, has been acquired by oil magnate and Chairman of Seplat Petroleum Development Company Plc, Dr. ABC Orjiako.

The 15-storey building,
designated Alpha 1 or Afren Tower, was designed by James Cubitt architects and built by the Chagoury-owned construction firm, ITB Nigeria Limited, for a private investor with the intention of having Afren Plc, once a London Stock Exchange (LSE) listed independent oil and gas firm with interests in Nigeria, Ghana, Kurdistan, The Gabon and Cote d’Ivoire, as its anchor tenant.

However, by the time Alpha 1 was completed last year, Afren had filed for administration, following allegations of unauthorised bonus payments by the company’s joint venture partner to the then CEO and CFO of Afren, a crippling bond default, its inability to refinance its operations, and eventual delisting from the LSE.

‘’With Afren in administration, an air of uncertainty befell Alpha 1 but this was lifted some months ago when Orjiako, an orthopaedic surgeon, with extensive interests in the oil and gas sector spanning more than two decades, bought the property

With the acquisition of the building, THISDAY learnt that Orjiako has commenced the relocation of one of his exploration and production firm – Salvic Petroleum – to Alpha 1.’’

The paper further reports that ‘’When contacted to confirm the acquisition of the building, Orjiako denied that he had bought the tower, however, top officials who work for Gilbert and Jack Chagoury who are behind the development of Eko Atlantic City, and two bank CEOs in the know of the transaction, maintained that he bought the building in his wife, Henrietta Orjiako’s name.

Another source claimed that Orjiako was not interested in making his latest acquisition public in order to keep his creditors at bay.

Although Orjiako holds the majority interest in Salvic Petroleum, the company is chaired by Mr. Oye Hassan Odukale, who is also the MD/CEO of Leadway Assurance Limited, and has his wife, Henrietta, as its executive vice chairman. Another director of the company includes Ikem Okafor who doubles as its CEO.

Salvic will be remembered for its attempt to take over the Strategic Alliance Agreement (SAA) held by Jide Omokore’s Atlantic Energy Drilling Concept (AEDC) for the financing of six oil blocks operated by the Nigerian Petroleum Development Company, the E&P subsidiary of the Nigerian National Petroleum Corporation (NNPC), until the deal fell through last year.

Despite its inability to get the federal government’s approval for the SAA after a competitive tender, Salvic has turned its sights on providing services as a sub-contractor to Shoreline Natural Resources Limited and its partner, UK-based Heritage Oil, operator of Oil Mining Lease (OML) 30.

OML 30, located 35km east of Warri in Delta State, is a joint venture oil block held by NPDC (55 per cent) and Shoreline/Heritage (45 per cent).

Shoreline/Heritage acquired their interest in the block from Shell in 2013 during the second round of asset sales held by the Anglo/Dutch multinational and its partners.

A senior official of Shoreline confirmed that Salvic, with its track record in E&P operations, has helped to ramp up production in the prolific oil block, which has 11 fields, to 60,000 barrels per day.

The Shoreline official also confirmed that his company has leased some space in Alpha 1 for proper integration of its personnel with the staff of Salvic.

The Shoreline oil block was one of many affected by heightened militancy in the western Niger Delta last year, especially when the Niger Delta Avengers (NDA) bombed the 87km Trans Forcados Pipeline (TFP), forcing many producers in the region to shut-in production.


The TFP was eventually repaired by Abbeycourt, another firm founded by Orjiako in the 1990s, enabling Shell to reopen the Forcados Oil Terminal (FOT) in Delta State. ‘’

thisday
Posted by MAN ABOUT TOWN at 2:40 AM