Inside The Famous Olojo Festival As Ooni Goes Into 7Days Seclusion 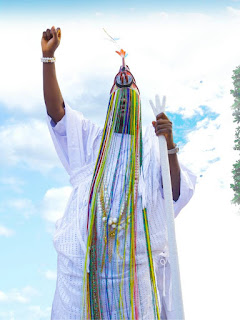 In the midst of the pomp and pageantry leading to the Olojo Festival 2017 we may not only consider the fascinating ceremonial splendour.

Needless to wonder why there was a twist to the celebration of Olojo Festival on the 10th of October 2016, when thousands of people gathered together to watch the game changer, the dynamite monarch of our generation, the face of African culture world-wide, the Arole Oduduwa , Oba Adeyeye Enitan Ogunwusi  (Ojaja II) as he wore the “Ade Aare” for the first time as the Ooni of Ife.  The “Ade Aare” is a special crown made of 151 items, part of which is cutlass and hoe. The crown which is worn by the Ooni during the annual Olojo Festival in the ancient city of Ile-Ife weighs over 70kg spiritually. The Ooni is expected to appease the major gods in the city and to pray for its citizenry in the course of the procession. It is believed that any prayer said by believers after sighting the “Ade Aare” on the day of Olojo comes to material equivalence in no time.

According to Yoruba mythology, as told by the uncommon king, who believes in “telling our stories ourselves, for history to be preserved and falsehood eliminated”  Oba Adeyeye Ogunwusi explained that, Olojo festival started with the third Ooni of Ife, Ogun and it is done to honour Olodumare, the “creator of the day .”  The festival is preceded by a 7 days seclusion of the Ooni of Ife after having heard the sound of the unseen drums which signifies the start of the preparation towards Olojo.  During the period of seclusion, the Ooni of Ife engages in spiritual activities which include total abstinence from food, drink and people including his immediate family, while he concentrates on prayers.  He supplicates, atones and presents the needs of the community to God.  The Oonirisa shall act in the capacity of the priest of the Oduduwa people and also as the mouthpiece of Olodumare during the course of the seclusion.

Other key players in the event include; the Osogun- The priest of Ogun, the traditional chiefs offering sacrifices at Oke-Mogun, other chiefs and Sooko(s) who pay obeisance to the Ooni on his way out of Ileegbo.  At Ilenla, the Lokoloko(s) - palace aides cladded in half camwood and white chalk with canes in their hands pave way for the movement of Ooni  to Oke-Mogun. While the Emese’s  - the king’s courtiers/ emissaries are saddled with the responsibilities treating the Ooni to rounds of entertainment on the second day. Oke-Itase is another venue to watch out for on the third day of the Olojo festival where the Ooni visits to pay homage to Orunmila. The Olojo festival 2017 takes place on 29th September – 2nd October, It’s a moment not to be missed!

The focal point of this debate is not just the making of the Olojo festival but the aftermath.
It is no gainsaying, that the position of the Ooni of Ife is more than the ceremonial splendour but a life full of sacrifices; where the king is deprived for the benefits of his community.  Asides from the abstinence during the seclusion, the impact of the seclusion is conspicuous on the Ooni of Ife. A look at the ‘before and after’ picture of the Ooni of Ife during the Olojo festival tells a story of maturity; his look is often almost 10 years older than it was before the seclusion.  Also visible afterwards is the augmented level of reasoning.
An Ooni of Ife acquires more knowledge and is spiritually inspired during the period of seclusion. This will in turn affect his disposition as the year passes by,  the Ooni of Ife’s judgement of circumstances after this period may be likened to the wisdom of Solomon on one hand and his retentive memory and knowledge of the culture would be bloated by the reason of his communion with the gods, his fore-fathers and the supreme God, the creator of the universe on the other hand.

As a people of culture, it is in our best interest to celebrate our cultural heritage having in mind that we cannot be more foreign than the foreigners (be more English than the English themselves) This does not make us fetish rather our holier than thou attitude tends to make us fake, knowing fully well that the mission of the colonial masters to replace our spiritual and cultural heritage with the idea that all that is foreign is good and greater was instituted for selfish interest in a bid to make Africans lose their self-esteem (see the address of Lord Macaulay as presented to the British Parliament on the 2nd of February 1835).

In same vein, the Olojo festival is expected to unite the people together. It is a celebration of the deities and celebration of the God of the Universe, the owner of the day, for preservation of the Yoruba race and the abundance of blessing bestowed on us by the creator.  It is also a time to celebrate the uncommon monarch, the first among the equal, the one and only;

Let’s celebrate him for his selfless services to mankind and especially the Yoruba race all over the world.  May your reign be long Kabiyesi , Oba Adeyeye Enitan Ogunwusi.
A s'olojo, aa ke gba'ajure ooooo!
Gbemisola ‘Bisi-Taiwo
PhD Candidate, Maynooth University, Department of Law.