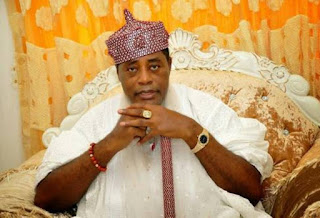 “A Lagos High Court has issued a bench warrant for the arrest of Ms Omobolanle Mobola Akinruntan, the first daughter of Oba Fredrick Obateru Akinruntan, the Olugbo of Ugboland in Ondo state and the chairman of Obat Oil.
The Igbosere, Lagos Island-based High court, presided over by
Justice L.A.M. Folami, issued the bench warrant for the arrest of Ms Akinruntan for contempt of court.” is how celebrity journal Encomium is reporting the latest news about Mobola, the daughter of Oba Obateru Akinruntan.

The report reads further
“According to the bench warrant, she was supposed to appear before the court on Thursday, August 31, 2017, but she refused to appear.
Again she was supposed to appear in the same court on Wednesday, November 8, 2017, she did not appear. Encomium.ng gathered that the court again has adjourned the matter to Monday, December 18, 2017, for the police to produce her.
The police, encomium.ng further gathered, have been dilly-dallying in arresting her.
The Maroko police station which is the closest to her Mobolaji Johnson, Lekki Phase 1 residence had given one excuse or the other why she has not been arrested.
Ms Akinruntan and her estranged husband, Mr Ayodeji Fanawopo have been having issues with the custody of their two children since 2010.
Mr Fanawopo had taken her to a London court over some irreconcilable differences in their marriage. But before the court could make a final judgement over the marital issues, Ms Akinruntan disappeared from London to Nigeria with the two children.
Mr Fanawopo got a judgement from the London court that the two children must be brought back to London.
He came to Nigeria in 2011 to effect the London court judgement in Nigerian court and he it got in 2012.
With the assistance of Lagos court bailiffs, the children were waylaid one morning on their way to school and brought to the airport for the onward trip to London. But before they could board the London bound flight some people suspected to be the family of Ms Akinruntan, with the assistance of some mobile policemen forcefully took the children from their father, Mr Ayodeji Fanawopo.
Mr Fanawopo later returned to London without the children that day. But he never gave up in his struggle to get the custody of his children and make his estranged wife face justice.
Since 2012, Mr Fanawopo has been in and out of court both in London and Nigeria to get justice. But each time the case is called in the court here in Nigeria, his estranged wife, Ms Mobola Akinruntan, was nowhere to be found.
This is what prompted the Lagos High court, Igbosere, Lagos Island, headed by Justice L.A.M. Folami, to issue a bench warrant for her arrest to be brought to court for contempt.”