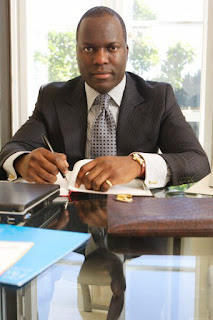 That he fathered a son with the controversial blogger, Linda Ikeji, is a pointer that Solaye Jeremi is no small player in social circles.
The Delta State-born big boy became an overnight celebrity and fodder for blogosphere and mainstream media when it emerged that
he is the father of Linda Ikeji’s son named Baby J.
In a bid to show that he has arrived, Mr Jeremih has splurged on some wonders on wheels notably the Rolls Royce Dawn described as the sexiest Rolls Royce ever built.
The Rolls Royce Dawn is valued at over $250, 000. It currently nestles in Jeremi’s garage where his friends have been trooping to since it arrived.
Accompanying the new acquisition is a Range Rover 2018 and a Benz S. Class. He also bought a Rolls Royce to his confidant and collaborator in Militancy business, Julius Rone, the chairman of UTM Group. A source said Jeremi must have splurged close to N400million on the cars. 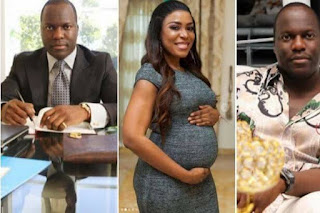 Nobody can authoritatively say however if any of the cars is for his new baby mama who is known to also have a taste for such high-end cars. It would be recalled that shortly before giving birth, Linda announced that she had ordered for a Bentley Mulsanne valued at over N100million. She has since taken delivery of the car.
While his dalliance with the blogger may be his claim to celebrity-hood, the dark-skinned dandy has been around for much longer. Jeremi was a London-based model for different designers notably Hugo Boss, Gucci and Joop.
His access to the glittering world of fashion and beauty pageantry exposed him to a lot of wanton hotties who loved easy money. A smart man, he delved headlong into linking his new female friends with his wealthy friends cutting across the political and business worlds.
For the moneyed class, having Jeremi as an acquaintance was a sure-fire pass to the world of beautiful women from all over the world. He would go on to become the go-to guy for many governors, ministers and businessmen who desired a pleasurable time outside Nigeria.
Sooner, he met wealthy Niger Delta agitator, Tompolo, with whom he bonded on many fronts – chiefly, their Delta roots and hedonism.
As time went by, he ventured into the oil and gas sector. Courtesy his closeness to the Minister of State for Petroleum, Dr Ibe Kachikwu, Jeremi was instrumental to the pipeline security deal between the federal government and Tompolo, which reportedly fetches all involved some millions of dollars at the end of every month.
In spite of this steady inflow of millions of dollars, Jeremi had been on the low until he decided to start living up to the hype. He’s currently dating Elohor a single mother of two. Elohor dumped her very hardworking husband, Owen to be with Solaye who has been taking her around the world.
Solaye is the envy of some old money in Nigeria. A young man without any office and business name, makes over 1m dollars but monthly. Thanks to Tompolo.
Solaye still fronts for Kachikwu whom he gives money to every month through Julius Rone ‘ s account.

themuckcrakeronline.com
Posted by MAN ABOUT TOWN at 8:56 AM