Details As Kwam 1’s Son Sultan Omogbadebo Is Arrested For Fraud In U.S 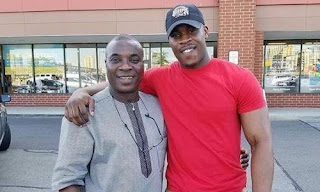 Musician Wasiu Ayinde Marshall’s son, Sultan Omogbadebo Anifowoshe has landed in trouble in the United States after being found to be a member of suspected fraudsters.
Anifowoshe, along with
eight others, allegedly involved in online romance and ‘mystery shopper’ schemes through which unsuspecting victims have lost at least $2 million in two years.

All the suspects were rounded up following an international investigation into cyber-enabled fraud schemes in and out of America by a Chicago-based investigative team.
The arrested suspects in Illinois are named as KWAM 1’s son, Sultan Omogbadebo Anifowoshe, 26, aka Ayinde; Babatunde Ibraheem Akarigidi, 39; Miracle Ayokunle Okunola, 21; Olurotimi Akitunde Idowu, 55; Daniel Samuel Eta, 35; Babatunde Ladehinde Labiyi, 20; Barnabas Oghenerukevwe Edjieh, 29.
Two others – Adewale Anthony Adewumi, 27; and Olaniyi Adeleye Ogungbaiye, 26, aka DonChiChi – were arrested in Texas and Lagos, Nigeria, respectively.
All nine defendants were charged with conspiracy to commit wire fraud by a U.S. District Court in Chicago following a criminal complaint filed December 4, 2018.
“The conspirators initially contacted victims online via applications and websites, including Match.com, Facebook, and Instagram, the complaint states,” the US Department of Justice said on its website.
“Another alleged cyber-enabled fraud involved a “mystery shopper” scheme, in which conspirators fraudulently offered victims opportunities to work as a mystery shopper and receive commissions for evaluating retailers.
“The victim received a check through the U.S. mail with instructions to deposit it in a personal bank account, withdraw the money in cash, and wire it to a third party.  The check turned out to be fake, and the victims were defrauded of the wired money, the charges allege.”
They allegedly used said money to buy exotic vehicles and on three occasions, the money was used to pay for vehicles on behalf of a Nigerian car company owned by one of them.
The EFCC is said to be carrying out related investigation into the syndicate in Nigeria.


The charge in the complaint against the defendants carries a maximum prison sentence of 20 years.
Posted by MAN ABOUT TOWN at 3:39 AM