What They Won’t Tell You About The Relationship Between UBA Chairman, Tony Elumelu And Atiku Abubakar 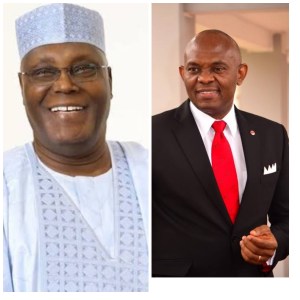 Some become brothers through the accident of a shared parenthood but there is nothing tangible that binds them together beyond blood. Others, however, have meticulously forged their brotherhood in a furnace of shared experiences, tightening their bond as they help each other duck and escape the slings and arrows life shoots their way.
That very talented banker and chairman of UBA Group Tony Elumelu is close to
many powerful individuals in Nigeria is stating the obvious. But what many don’t know is that the power dressser is very close to PDP presidential candidate, Alhaji Atiku Abubakar in particular.

Theirs is a beautiful friendship that dawned when Atiku still occupied the nation’s number 2 position. Like a caring older brother determined to pave the way for his younger one, Atiku took Tony under his wings and helped to open many doors for the enterprising chairman of multiple businesses including Transcorp and Heirs Holdings.
Under the watchful eyes of Atiku who helped to pull many political strings behind the scenes, Tony was able to spread his wings and blossom into a mighty Titan who towers over the business world like a colossus.
Not even Atiku’s exit from Aso Rock in 2007 could ruin their friendship. The A-list businessman from Delta and the top political powerbroker from Adamawa built a connection as sturdy as the Niger Bridge.
Now with roles reversed and the PDP presidential candidate needing all the help he can get in his ambitious bid to unseat the incumbent, Tony has assumed the mantle of the wealthy younger brother who will help to pay for the pleasures of the elder. His limitless financial muscle and incredible influence in multiple arenas will come in handy for the Atiku campaign machinery.


According to those whose ears are tuned to happenings in high places, Atiku has already pencilled Tony down as one of the few big men who will make things happen for him come 2019. On his part, the UBA head honcho is said to be excited at the possibility of helping his bosom friend and sworn brother into Aso Rock next year. Especially as it would lead to more open doors for his business empire to expand.

thelagostimes.com
Posted by MAN ABOUT TOWN at 11:21 AM