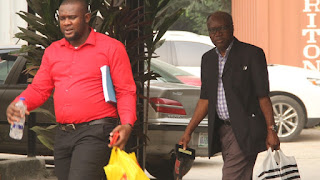 Shamsudeen told the Court that the CAC received a request from the EFCC hinged on an investigation involving Petro Union Oil and Gas.

He said: "We had a request from the EFCC to provide Certified True Copies of documents with respect to Petro Union Oil and Gas.

"We responded and provided the documents relating to the registration of the company."

He identified the documents.

Jacobs thereafter applied to tender the documents before the Court. No objection was raised by the defence team.

Subsequently, Justice Liman admitted in evidence the bundle of documents, which included the investigation activities letter of the EFCC, as well as CAC pre and post incorporation papers as Exhibit A-E.

The witness further confirmed that the company was incorporated on the 28th December 1979 with registration number 31157.

The case was thereafter adjourned till March 10, 2021 for continuation of trial.

It will be recalled that the EFCC, on January 27, 2021 re-arraigned the defendants before Justice Liman.

One of the counts reads: "That you, Petro Union Oil & Gas Company Limited, Abayomi Kukoyi, and Princess Gladys Okpalaeze (now at large) on or about 29th December 1994, at Lagos, within the jurisdiction of this Honourable Court fraudulently procured a Barclays Bank's cheque dated 29th December 1994 in the sum of £2,556,000,000 (Two Billion Five Hundred and Fifty-Six Million Pounds) made payable to Gladstone Kukoyi & Associates, purporting the said cheque to be meant for foreign investment in the construction of 3 refineries and petrochemical complex in Nigeria, when you knew the said cheque to be unlawfully procured and you thereby committed an offence contrary to section 1(2)(a) of the Miscellaneous Offences Act, Laws of the Federation of Nigeria, 1990 and punishable under the same section."

They pleaded "not guilty" to the charges when they were read to them.