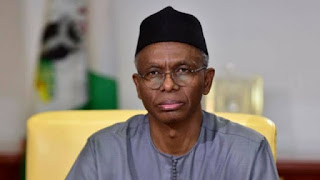 El-Rufai who once famously declared he is not a fan of the powerful politician revealed that Tinubu initiated the reforms that Lagos is benefiting that Kaduna government is replicating to enthrone good governance.

“If Lagos were a country, it would have a bigger GDP than many African countries. For us in Kaduna state, Lagos is a model that we follow. You started the tax reform in Lagos before we also started some of our reforms. We look at Lagos competitive advantage in many areas and try to implement reforms that will bring us closer to what Lagos has been able to achieve...

“Lagos has been blessed with many good governors. The reforms initiated by Governor Bola Ahmed Tinubu are still of benefit to the people of Lagos. Other states have not been so lucky to have visionary governors one after the other from Tinubu to Fashola to Ambode and now my brother who is breaking a new grounds to move Lagos forward.

“We are all in support not only in the growth and development of Lagos but also in the recovery of the #EndSARS protests in October. We strongly support the rebuilding of Lagos. We are proud of Lagos as the largest mega city in Africa and it is an engine of growth for the whole country.

“Kaduna is number one in ease of doing business. I look forward to Lagos becoming number two or even overtaking us. The better Lagos does, the better Nigeria does. The fate of Nigeria cannot be separated from the destiny of Lagos.”