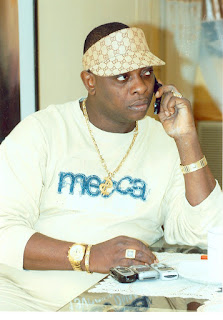 Friday May 14 2010, there was only a one stop place of enjoyment on Vitoria Island Lagos- Movida.
It was the opening night of the all night house of enjoyment put together by influential player on the scene Akeem Shodehinde and rising factor in the night life business, Jeniffa.
Participant at the ceremony tagged it ‘an irrepressible night of undiluted enjoyment’
Sources disclosed that thought the fun flight kicked off a little later than planned the night lived up to its billing.
The crowd was hectic, the music was unrivalled and the reception by the club owners and their crew tagged an experience worthy of experiencing again.
Right from the entrance Akeem Shodehinde in a cool and sparkling suede jacket over deep black pants was on hand to specially welcome the guests. Beautiful female members of his crew led them to carefully chosen spots. And before many were seated bottles of champagnes, complimentary drinks, were on the table. The banter was light and the music was good- it was strictly old school jamz in the early hours of the fun.
Before many knew what was happening it was past midnight- and the hall was filled to capacity.
The V.I.P section was choked- the regulars was packed, all the big players in the night life were on hand to celebrate one of their own. And the D.Js- Jackson and Stramborela- did justice to the event. Everyone danced their hearts out to the beats.
According to an aide of Akeem Shodehinde’ the one hundred and fifty million naira investment is worth every dime this night’
And he went on to detail millions of naira expenditure on musical equipment, about twenty flat screen television, different phases of the renovation work, security lightening, air cooling systems and other things.
Independent observers however confirmed, like the name in English ‘Movement’, Movida housed the movement of night life players from all other fun spots all night long that night.
And, many affirmed with back slaps and words of encouragement as they left in the wee hours of the next morning to Akeem and his partner that ‘the experience is something that will make the place a front runner if it is sustained’
Posted by MAN ABOUT TOWN at 2:29 AM