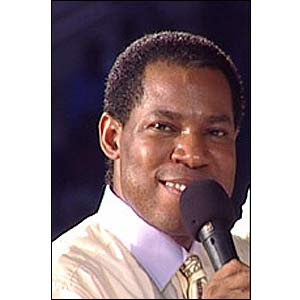 A multi million naira fraud is currently rocking the branch office of a micro finance bank situated within the confines of the Oregun, Lagos premises of place of worship- Christ Embassy.
And to complicate the matter some of the suspects in the scam currently undergoing police investigations are listed as worshippers at the Christian centre with Pastor Chris Oyakhilome as religious headman.
The name of the micro finance bank is given as Parallex.
The identities of the suspect in the scam are revealed as Orie Nwakaego Felicia, keneyinboh Mariama Eneyi, Ezeagwuna Chinaelo Hannah and Essien Mable Ufon Abasi. They are all female members of the micro finance bank.
Sources put the figure of the fraud at twenty five million naira.
The accused were said to have perpetrated their crime by diverting company funds into private accounts.
Ezeagwuna Chinaelo Hannah and Essien Mable Ufon Abasi are said to have confessed to the crime.
Ezeagwunna was said to have lived large with her share of the scam living in well furnished apartments- and cruising about town in state of the art cars.
Her accomplice Keneyinboh was said to have attempted to escape detection with a hurried resignation in Dcember 2009 that was rejected- 2-5millionm naira was discovered missing in one of the accounts in her care.
Orie Nwakaego Felicia simply address as Ego by friends allegedly diverted over fourteen million naira from customers account- 2.3 million was discovered in her private account in the course of investigation into the case.
She is alleged to have refused to divulge the whereabouts of the remaining fund.
It was also discovered in the course of investigation that Nwakaego reportedly expended part of the stolen fund on a pathfinder jeep she doled out to her boyfriend.
Informants claimed she planned to marry the beneficiary of the car gift in May 2010.
Insiders revealed that the development has generated trust crisis among friends of the suspects who are co worshipers at the church where the affected business is located.
Parallex Microfinance Bank has it head office on Ogunlana street off Allen Avenue Ikeja.
Posted by MAN ABOUT TOWN at 12:02 PM