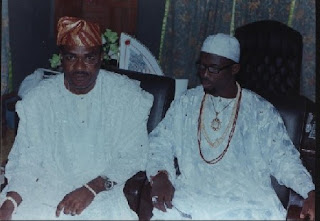 If the whispers starting to make the rounds on the street is anything to go by- then a seemingly age long marriage celebrated over time is over.
With the added speculation that the only tie linking the parties involve together is how to go about the separation in a manner that will not result in acrimony- and celebration of the absurd in the public domain.
The couple at the centre of this newest gist in town are Shade and Rilwan Aleshinloye.
They are said to have quietly called it quits with their marriage.
And those spreading this tales put the onus of proof on a peculiar arrangement that has taken hold of their lives.
Shade, the owner of a jewellery store situated inside civic centre is said to be permanently in residence at the couple’s home inside Lekki Phase1 Lagos- while the former local government administrator and socialite Alhaji Rilwan Aleshinloye is said to be holed inside Aleshi Hotels along Lekki Epe expressway.
Those conversant with the ways of the couple claimed the arrangement normal in the past except for the introduction of a new factor- Shade has not been spotted anywhere close to the vicinity of the hospitality centre for weeks running into months now.
Sources claimed the normal practice was for Shade to come visit her husband during his prolonged stays at his hotel.
‘But she has not been spotted at the place for weeks- even months now’ a source claimed.
This conduct has sparked off speculations against the background of claims that she is seen here and there- at business places and social engagement.
The socialite has also refused to go see his wife too- he is said to conduct his affairs from his hotel.
Those close to them have however refused to official comment on the specific situation of the marriage of their mentor and boss.
Both Shade and Rilwan Aleshinloye control a certain level of street followership- and notoriously private about their ways.
Many in the now whisper the development for fear of street reprisal from unknown quarter.
Posted by MAN ABOUT TOWN at 5:30 AM