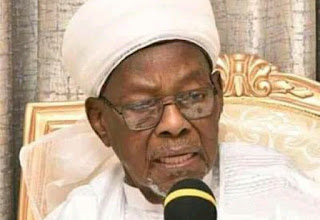 A billionaire Kano businessman and Islamic scholar, Isyaku Rabiu, is dead.
According to reliable sources who spoke to the
News Digest, the cleric passed away after a brief illness in the United Kingdom.

He was aged 90 years.
A business associate who confirmed the news to the News Digest said he will be buried according to Islamic rites as soon as his body arrives Nigeria.
Mr Isyaku founded a major family operated holding company with a history of investment in manufacturing, insurance, banking and real estate.
In the 1970s, the group invested in manufacturing with its first investment being the Kano Suit and Packing Cases company, a factory producing suit cases and handbags. The firm was a joint venture with Lebanese investors.
In 1972, he formed the Bagauda Textile Mill, manufacturing woven cloths for uniforms. From then on he established a series of ventures in different segments of the economy including frozen food service, real estate, sugar and a motor vehicle and parts distribution company specialized in Daihatsu products. However, unfavourable exchange rates and economic conditions forced the company to scale back on manufacturing and returning to its trading roots.
He had a large family with many children and grandchildren, including his first son Nafiu Rabiu; influential Nigerian businessmen Abdulsamad Rabiu, Chairman of BUA Group; Rabiu Rabiu, owner of IRS Airlines, Naziru Rabiu, Quraish I Rabiu, Makiu Rabiu, Abdullahi Rabiu, Muhammad Rabiu and Daha Rabiu among others.


He lived in the biggest single mansion in Kano. He was widely loved and respected and known for his generosity and Islamic spirituality.
Posted by MAN ABOUT TOWN at 3:57 AM