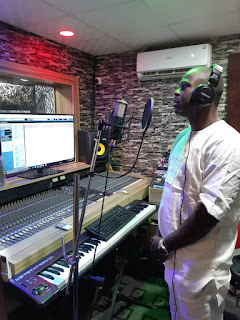 The song is titled ‘’ Sekere” (named after the musical gourd decorated with a net of beads used at joyous occasions).

Speaking on his latest song, Apase Emi disclosed ‘’ Sekere is an African musical instrument played only at joyful events. Aso funfun (White attire) always earns distinct respect at every gathering. The song combines the significance of Sekere and white attire to showcase the importance of using Psalms as a Christian. If you use Psalms, you cannot witness sorrow nor be put to shame. For every situation, there is a relevant Psalm. Are you troubled? There is a Psalm to address that’.
The popular gospel singer also revealed where he got the inspiration for ‘’Sekere’’.

‘’I got the inspiration to write this song as a member of the mass choir of the 2019 Celebrate the Comforter, a program convened by Rev. Mother Esther Abimbola Ajayi and which took place at the Tafawa Balewa Square Lagos on 20th July 2019’’ Apase Emi stated.

The new song Sekere will be available on musical platforms later today.