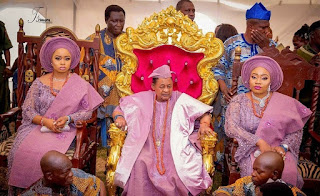 Over 200 kings – in Yoruba land – confirmed attendance at the 2019 edition of the convention for traditional rulers put together by Heritage Forum.

The event is scheduled for
November 27/29 in Oyo state.

Alaafin of Oyo, Oba Lamidi Adeyemi is the chief host.

The primary objective of the annual convention is to foster unity among traditional rulers in Yoruba land in the bid to regain the glory of the institution in modern times.

Heritage Forum which is the convener of the convention is the concept of Muyiwa Oladipo – a former commissioner and speaker in Ogun state – and his partner Rufai Adeleke.

Oladipo was former commissioner in the ministry of Local Government and Chieftaincy and  Culture and Tourism in the first and second terms of immediate past governor Ibikunle Amosun.

He created the African Drum Festival that is the pride of the Amosun administration.

The Heritage Forum has been interfacing with traditional rulers in the promotion of African culture and tradition for over four years.