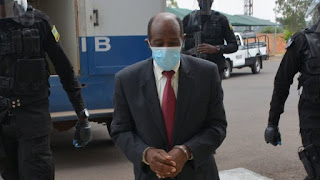 Rwanda said it had arrested Paul Rusesabagina - the man who was hailed a hero in a Hollywood movie about the country's 1994 genocide - on terrorism charges and on Monday paraded him in front of the media in handcuffs.

Rusesabagina was played by Don Cheadle in the Oscar-nominated film 'Hotel Rwanda' which told the story of how he used his job as a hotel manager and his connections with the Hutu elite to protect Tutsis fleeing the slaughter.

On Monday (August 31), two police officers brought the 66-year-old to a news conference at the headquarters of the Rwanda Investigations Bureau and let media film him and take photographs.

Rusesabagina did not speak. He has said in the past he is the victim of a smear campaign in Rwanda.

Rusesabagina, a critic of President Paul Kagame, moved abroad after the genocide and won worldwide acclaim, receiving the United States' highest civilian award, the Presidential Medal of Freedom, in 2005.

But back home he has sparked outrage with warnings of another genocide, this time by Tutsis against Hutus.

About 800,000 Tutsis and moderate Hutus were murdered in 100 days in the central African nation from April 6, 1994. Soldiers of the then Hutu-led government and ethnic militia allies orchestrated the genocide.

The killings ended when Tutsi rebels, led by Kagame, seized control and triggered an exodus of more than 2 million Hutus.
Posted by MAN ABOUT TOWN at 11:58 AM