It has to be said that the Economic and Financial Crimes Commission (EFCC) has no problem whatsoever getting in the face of any and everybody. They say that power and privilege are safe havens. Apparently, this wisdom falls apart wherever EFCC is the Spanish Inquisitor and a Nigerian Court is in session. Two very prominent figures are the latest fish to be caught in the nets, and the story is all the more interesting because the fish have refused to be hauled aboard. 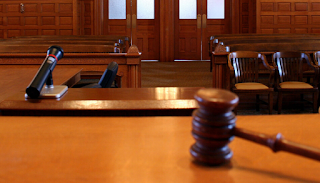 In this episode of ‘EFCC and Company’, a Special Offences Court has ordered the apprehension and arrest of former Sterling Bank Director, Yemi Idowu, and Lagos-famous socialite and Prince, Waheed Gbadamosi Eletu-Odibo. A
double-decker charge has been levelled against both Idowu and Gbadamosi: for collaboratively filching someone else’s plots of land, and then essentially making a mockery of the Court by refusing—without fail—to appear before it.

This was basically how the whole thing was submitted to Justice Sherifat Solebo of the Special Offences Court. Having considered the lengths and breadths of the accusation, Justice Solebo immediately issued a bench warrant.

Now, the double-decker charge against Idowu and Gbadamosi.

The charge of stealing someone’s land—notarized as Conspiracy, Stealing, and Unlawful Conversion—evolved from the dealings of Yemi Idowu and Waheed Gbadamosi with Onononyi Patrick Okonkwo. The latter reportedly owned the over 250,000 hectares of land that Idowu and Gbadamosi allegedly adopted as their own properties and sold off, sometime between 2013 and 2016. The plots of land in question are reportedly located around in Eti-Osa Local Government Area of Lagos, around Crystal Road, Osapa Village.

On a side note, the same Yemi Idowu and Waheed Gbadamosi have been accused of—again—adopting and selling off another plot of land belonging to Uchenna Temple Anazodo, around the same Crystal Road, Osapa Village.

Second deck of the charge: refusal to appear before Court.

The news has come to light that the accused Yemi Idowu and Waheed Gbadamosi are not skirting the arms of Justice Solebo—that is, the Court—for no reason. The gist is that the accused pair counter-charge the EFCC of breaching their fundamental human rights in the process of filing charges against them. Interestingly, EFCC reported that that Court already ruled against them, that there was no violation of human rights. The Court reportedly went so far as to demand that they make themselves available and at the behest of Justice Solebo and her Court.

Evidently, neither Yemi Idowu nor Prince Waheed Gbadamosi showed up. Ergo, the renewed efforts for their arrest.

Since their respective companies—Aircom Nigeria Limited and STB Building Society—have also been implicated in the matter, it is only a matter of time before both Yemi Idowu and Prince Waheed Gbadamosi appear in Court. All things being equal, that is.