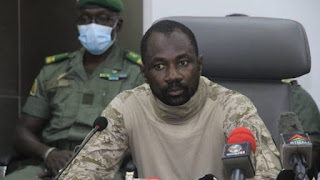 West African leaders have given Mali's junta until September 15 to name a transitional prime minister and president.


In a statement at the end of a summit on Monday, the leaders of the 15 nations that make up the Economic Community of West African States, also insisted that those two positions should be occupied by civilians.

and is keeping pressure on the group of army colonels that now rules the country by maintaining sanctions, including closed borders and halted financial flows.

But no consensus has yet been reached on the formation of a transitional government ahead of the promised elections.

What's at risk, international leaders fear, is that continued political turmoil will undermine a joint fight against militants across the wider Sahel region.

ECOWAS did, however, welcome steps taken by the junta to start talks with Mali's political parties and civil society groups.

Those discussions got off to a bumpy start at the weekend

when supporters of the influential M5-RFP coalition, which led protests against Keita that preceded the coup, said they had been sidelined.

The negotiations, which are also being held in regional capitals across Mali, will continue later this week.
Posted by MAN ABOUT TOWN at 6:47 AM