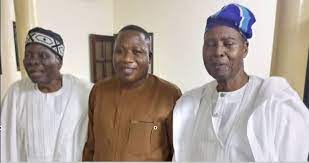 The National Publicity Secretary of Afenifere, Jare Ajayi, said this when contacted for his reaction to the development on Monday.

He said, “Afenifere and indeed Yoruba people as a whole are very happy that the Yoruba Nation agitator has been released.

“Sunday Adeyemo Igboho’s release is not just for him and the Yoruba people. It is a victory indicator for all those who believe in personal liberty and the right of a given people to self-determination.

“Afenifere commends Prof Banji Akintoye, Prof Tunde Adeniran, Ilana Omo Oodua, and Yoruba Obas in Nigeria and in Benin Republic for their efforts in seeing that Igboho is set free.”

His counsel, Chief Yomi Aliyyu (SAN), said this in a message sent to one of our correspondents on Monday.

Aliyyu said Igboho was released to his medical doctors with the agreement that he would not leave Cotonou for any reason.

He said, “I am to inform you that Chief Sunday Adeyemo, aka Igboho Oosa, has been released from prison to his medical practitioners under the agreement that he should not leave the medical centre or Cotonou for any reason.