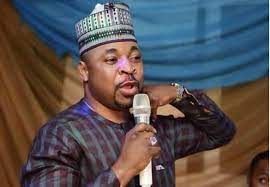 The suspended State Chairman of the National Union of Road Transport Workers (NURTW) Musiliu Adesanya (MC Olumo) has been accused of stealing the NURTW's property worth Millions of Naira.

NaijaCelebrities gathered that immediately after MC Olumo's suspension from the  National Executives of the Union in Abuja and his subsequent withdrawal from the Union, Musiliu Akinsanya and his loyalist invaded the Union Secretariat located at Oko-oba, Agege Lagos and carted away the union's tickets estimated to worth over 40 Million Naira.

The invading of the office Secretariat by the former head of the Union and his loyalists is directly against the announcement made by the State Government on the activities of the Union in the State.

Aggrieved members of the union body have continued to call for a deliberate decision to be taken towards the criminal and non-charlatan attitude of Musiliu Akinsanya towards constituted authorities.

Union members have also feared that the former union boss's action could lead to a total breakdown of law and order in the State as the tickets are presently been sold by Akinsanya through his loyalist, Korede as of Friday 11th March 2022 even when the suspension placed on the Union by the State Government is yet to be lifted.

Recall that the  Musiliu Adesanya also known as MC Olumo was suspended from office for inciting members against and insubordination to constituted authority.