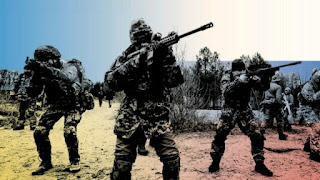 The Nigerian government on Monday said it will not tolerate the recruitment of its citizens as mercenaries to support Ukraine fighting Russia.⠀⠀Nigeria’s foreign affairs ministry spokesman Francisca Omayuli in a statement said Nigeria is in talks with Ukrainian counterparts to forestall such an occurrence.⠀⠀“As a responsible member of the international community and consistent with our obligations under international law, Nigeria discourages the use of mercenaries anywhere in the world and will not tolerate the recruitment, in Nigeria, of Nigerians as mercenaries to fight in Ukraine or anywhere in the world,” Omayuli said.⠀⠀“The Federal Government will continue to engage with the Embassy of Ukraine in Nigeria and other relevant authorities to prevent this possibility.”⠀⠀Nigeria’s opposition to hiring its citizens to fight Russia in Ukraine comes days after media reports suggested that Nigerian volunteers were being drafted for the ongoing war.⠀⠀Ukraine’s President Volodymyr Zelensky last week called on foreign nationals who are “friends of peace and democracy” to travel to the country to fight against the Russian invasion.⠀⠀“Anyone who wants to join the defence of Ukraine, Europe, and the world can come and fight side by side with the Ukrainians against the Russian war criminals,” Zelensky said.⠀⠀