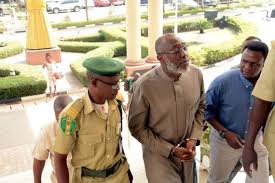 Two witnesses brought before a Federal High Court in Abuja by the Economic and Financial Crimes Commission have told the court how the spokesperson of the Peoples Democratic Party, Olisa Metuh, and his company, Dextra Investments Limited, transferred the sum of $2million
allegedly collected from the office of the National Security Adviser, Sambo Dasuki.

She explained further that she went ahead to change the money to its naira equivalent through two bureau de change operators she engaged.

She said, “He gave me the sum of $2m in $100 bills. It was taken to bureau de change operators who would then transfer the money to ARM. From there , I proceeded to Mr. Sie Iyenome’s office at Wuse 2 where I gave him the sum of $1m.

“I also invited Mr. Kabir Mohammed and I also gave him the sum of $1m to transfer the naira equivalent in favour of Destra Investment Limited. Later on the same day, December 2, 2014, Mr. Kabir and Mr. Sie Iyenome confirmed the receipt.”

She said she changed the dollars into Nigerian currency and had it transferred to Mr. Metuh’s account.

The second witness, a bureau de change operator, said he had the sum of $1 million dollars exchanged to N183 million and transferred to the account of Dextra Investments Limited.

He however said he had no knowledge of either Mr. Metuh or his company, Dextra investment Limited, before that time.

Mr. Metuh is standing trial for allegedly collecting N400 million from Mr Dasuki’s office.
Posted by MAN ABOUT TOWN at 7:49 AM