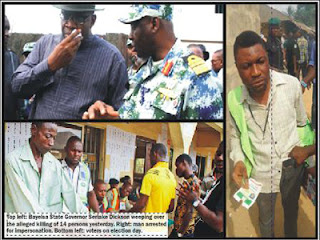 A WEEPING Governor Seriake Dickson of Bayelsa State yesterday said that
14 people- four policemen, two soldiers and eight civilians – were feared killed during the rerun governorship election in the State.

But the Police denied any death during the election.

“I can confirm to you that nobody was killed in any part of the state during the election.


Be rest assured that there was no report like that”, the Police Public Relations Officer in the state, Butswat Asinim, a Deputy Superintendent of Police (DSP) said in reaction to questions about killings during the polls.

Dickson, in a statement by his Chief Press Secretary, Mr. Daniel Iworiso-Markson, condemned the violence in Brass, Nembe, Ekeremor town and parts of Southern Ijaw Local Government Area and accused the All Progressives Congress (APC) of masterminding the killings of innocent Bayelsans.

He said the violence had also vindicated his earlier position that the security agencies particularly the military were partisan and unwilling to provide enabling environment for a free and fair election to take place.

Dickson accused the security agencies of providing cover for the APC to perpetrate violence and rig the elections in the state.

“To achieve their sinister plot, APC militants hijacked election materials and wrote results in many wards of Southern Ijaw, Brass, Ekeremor town, Brass while elections were disrupted in parts of Yenagoa and in a polling unit in Otokpoti, Ogbia Local Government,” he said.

The governor asked the Independent National Electoral Commission (INEC) to cancel the elections in polling units where the APC hijacked electoral materials.

The governor wept for those killed and called for the arrest of the perpetrators of the killings.

He consoled the bereaved families and thanked Bayelsans for reposing confidence in him and his government.

He expressed confidence that he would win the poll despite the challenges.

Pandemonium was said to have broken out in Ekeremor when armed thugs allegedly led by an army major invaded the area and carted away electoral materials.

A PDP stalwart was reportedly held hostage by thugs in his house in Ekeremor.

Turnout by voters was said to be hig   minister dismissed reports of violence in the area.

He accused the PDP of engineering the rumour.

He described the election in the area council as peaceful and said  the PDP launched into  propaganda to blackmail INEC into  cancelling the poll.

He also said he was not aware of any killing of a security operative in a clash with militants.

He said: “Election in Ekeremor went on peacefully and the resort to this by the PDP is just a way of laying the foundation to cancel the supplementary poll so that whatever advantage it had before now will be sustained. No shooting whatsoever in Ekeremor.

“Rather, it was the PDP, in concert with one Major from 5 Battalion Warri that came to cart away electoral materials from Ekeremor to Egbema Angalabiri.

“We have on record that the said major is on the pay roll of a known ex-militant leader bent on bringing down the APC in Bayelsa state.

“We call on military authorities to investigate the role of the said major because he took away the materials without any other escort provided either by the police or the DSS”.

In Southern Ijaw, the rerun election was reported to be peaceful in some areas while in other communities, they were said to have been characterized by pockets of malpractices.

Materials meant for some units in Southern Ijaw Ward 4 were hijacked by hoodlums.

In Angolobiri Ward 1, youths were said to have destroyed electoral materials following shootings that occurred in the area.

But the situation was brought under control as people were said to have done accreditation and voted.

In Amassoma, though the elections were generally peaceful and orderly, PDP sources said materials were hijacked in some polling units.

Sources said materials were hijacked in Brass, Nembe, Yenagoa and some areas in Ogbia local government areas where the elections took place.

PDP accused President Muhammadu Buhari of orchestrating moves to force the governorship candidate of the APC, Chief Timipre Sylva on the state.

But the APC in a statement signed by the Sylva/Igiri Campaign Organisation (SICO) lambasted the PDP for dragging the name of the President into the Bayelsa poll.

SICO’s Director, Media and Publicity, Chief Nathan Egba, said the Presidency had remained neutral since the electoral process started in the state.

Egba said the media report linking the Presidency to the Bayelsa election was misplaced and mischievous.

He said the APC was shocked at such claims coming from the PDP at a time election was ongoing in the various polling units across the state.

He said: “The purported statement from the PDP giving victory to the APC in the governorship poll is an admittance of imminent defeat on their part as they must have sensed from the reports coming from the field.”

Egba advised Governor Seriake Dickson to learn from the experience of the last presidential election and stop his brand of   propaganda that had not taken him far since the election process began months back.

He said thugs suspected to be working for the PDP yesterday attacked the APC agent in Nembe-Ogbolomabiri, Barrister Doumo Ogbomani and other party stalwarts at the Local Government INEC office during the distribution of materials for the rerun election in the community.

He said they were attacked by machete-wielding PDP thugs in the presence of soldiers and other PDP stalwarts dressed in black with the inscription “African Security Service” on their shirts.

Egba said Barrister Ogbomani and four other APC supporters were seriously wounded in the attack.

Reports from the field, he said, indicated that the process was generally peaceful adding that security operatives lived up to their bidding.

According to him: “Among the 12 fake INEC officials were some people who later identified as members of the PDP Restoration Media team.

“Also, apprehended at the same Famgbe were two other persons including a native of Kogi State posing as PDP agents.

“The Sylva-Igiri Campaign Organisation however, commended the security agents for their arrest but appealed to them to ensure they are prosecuted.”