‘’I Constantly Use My Gtbank Account’’ Notorious Billionaire Kidnapper, Evan Declares As He Leads Police To Detention Camps 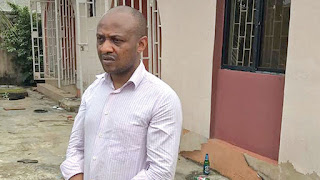 Though he claims to have several bank accounts, billionaire kidnapper popular known as Evans insists he uses his Guaranty Trust Bank Account more than others.

‘’I constantly use my Gtbank’’ he told detectives as he led them to detention camps where he kept victims until ransoms are paid.

According to information monitored on Guardian newspaper the separate buildings situated in Igando and Ikotun areas of Lagos, were hideouts for his kidnap victims till ransoms are paid.

The captives were kept for days, weks and even months till negotiations concluded with their loved ons.


According to information credited to Evans by Guardian  “I rented the house in 2010 and used it for my detention camp. I have three victims inside the house. I paid for only one year rent. I have just three camps in Lagos where I kept some of the victims I kidnapped and the camps are in Jakande Estate, Igando and Gowon area of the state.

“One of the victims, Udoji, I collected one million dollars from him. The other two victims paid me $300,000 and $250,000. “Whenever I noticed policemen are after me, I will move the victim to a different camp so as to prevent policemen from tracking me. I rented the Jakande house for N750,000 per annum. I also operate several bank accounts, but I constantly use my Gtbank Account.’’

He is however yet to provide elaborate reasons for his declaration of love for Gbank as the most preferred financial institution for his infamous dealings.

This is against the backgroud of rising speculations and conjectures of provision of ‘’services’’ that eased Evans notorious exploits.


Arrested on June 10 at  one of his palatial homes in Magodo Estate, Lagos – revelations of Evans exploits have kept the nation spell bound since he was nabbed
Posted by MAN ABOUT TOWN at 11:55 PM