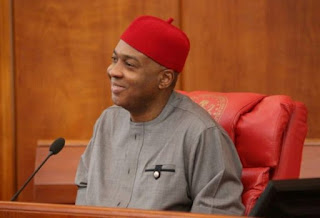 When the assembly signed off two years ago, the Nigerian populace was full of hope and optimism that the 8th Senate, under the leadership of Senator Bukola Saraki, would not disappoint in ensuring that
the wellbeing of ordinary Nigerians would be its number priority.

And so far, the upper chamber has not disappointed.
Political pundits may want to argue otherwise; of course, nobody would expect it to be a free ride or 100 per cent accuracy.
Senator Bukola Saraki made it clear, right from the onset that it would not be business as usual and following the legislative events that made up the past 730 days, the current assembly has surpassed its predecessors.
The first test before the national assembly was the confirmation of the ministerial nominees sent in by the presidency.
Despite the fact that public opinions were divided over the compositions, the senate ensured that due diligence was its watch word in carrying out the confirmations.
Never in the history of this country has the word ‘budget padding’ appeared. But due to the tenacity of the new assembly, it did. This led the presidency to block the leaks and save Nigerians revenue from landing in the pockets of few.
Other achievements are the National Oil Spill Detection and Response Agency Amendment Bill, 2012, which focuses on oil spilling in Niger Delta; Gas Flaring Prohibition Bill, 2012, which criminalises wasting gas and turning it income generation and the Climate Change Commission Bill, 2013.
Unlike its predecessors, the 8th senate actually put the executive arm of government on its toes in ensuring that governance is made accountable to the people. This and many more make it the most hardworking since the 4th republic.
It initiated the first-ever National Assembly Joint Public Hearing on the budget, where 3-day public hearing organised for the public, CSOs and labour organizations. These gave them the opportunity to weigh-in on the 2017 appropriations bill.
The senate intervened in the Abuja Airport closure. It argued that it would affect businesses operating in the capital and pushed for alternatives to the closure of the Abuja airport.
Its continued oversight on the activities of the executive exposed the abuse of import duty waivers on rice.
It immediately mandated its ad-hoc committee to investigate the removal of import waivers on rice.
The CBN’s anti people policies, especially on forex, were quickly reviewed on intervention of the 8th assembly and detection of the fraudulent activities involved in the implementation of TSA. The senate, under the leadership of Saraki, brought the act to a halt, thereby saving Nigeria N20 billion from the implementation of the TSA policy.
The senate, however, rejected the fact that if Nigerians couldn’t yet enjoy stable electricity, fixing the current charges is greatly unfair. Therefore the Nigerian Electricity Regulatory Commission, NERC was mandated to immediately abolish fixed charges on electricity consumption, and bulk marketing of villages and communities.Accountability seems to be the driving force behind the activities of the 8th senate as there is a Senate Committee on Legislative Compliance, whose duty is to hold the senators and senate committees accountable to their deadline and mandates.
There is yet an aspect of the society that the hardworking senators are yet to touch. They have moved motions on International Women’s Day 2016 on Gender Equality, which decried the rate of marginalization of Women and sought fair treatment for women in Nigeria.
An 8-man Ad Hoc Committee on North East charged with ascertaining the total amount of funds that have been released to the Presidential Initiative on the North East and probing spending by the Federal Government on the humanitarian crisis in the North-east was inaugurated.
It was the committee that indicted the Secretary to the Government of the Federation, Bashir Lawal, for misappropriating funds upwards of N200million. The indictment led to his eventual suspension by the presidency.
Others include allocation of N10bn to IDPs in the northeast in recognition of the dire situation, stoppage of the proposed hike in prices of data plan by the Nigerian Communications Commission, investigation of the revenue generating agencies over alleged leakages, non-remittance and misuse of generated revenue.
It was also responsible for exposing the telecom giant, MTN, failure to pay necessary tax in the country.Nigerian are greatly and negatively impacted by the ongoing economic recession in the country, and in response, the senate had already forwarded a 21 point resolution on executive actions needed to take to shore up investor confidence, create jobs, increase revenues and get Nigeria’s economy back on track.The lists of bills passed by the upper chamber of the national assembly are huge compared to its age and none of them was white elephant.
Despite being the most antagonised and troubled Senate president in the history of Nigeria, Saraki refused to be discouraged in ensuring that the people come first.
Senator Olubukola Abubakar Bukola Saraki, the 8th Senate president, was never given a chance to succeed right from his emergence, even members of his political party formed the highest numbers of those against him, yet going by the achievements above, this very assembly has done well.
As we look forward to another glorious two years to cap a complete tenure, I make bold to say I am confident in the Nigerian national assembly.
(Omoniyi Idowu is a social commentator based in Abuja,Nigeria)
Posted by MAN ABOUT TOWN at 12:27 AM