More ICT Champions To Be Discovered As Zenith Bank, Readamana Go Into Partnership 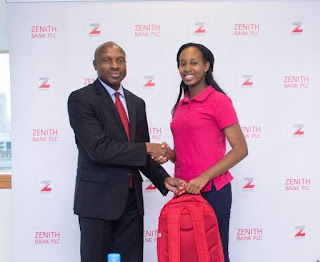 Speaking
in Lagos on Tuesday while receiving the Nigerian contingent to the 2017 edition of the Microsoft Office Specialist World Championship (MOSWC) held in Disneyland, California, USA, Amangbo said the bank was encouraged by the performance of the team and would work with the Nigerian organisers to enlarge the competition.

Amangbo, who received the team in the bank’s Head Office on Victoria Island, said the objective of the competition aligns perfectly well with the bank’s strategy on corporate social responsibility, which has at its core, youth empowerment through Information and Communication Technology (ICT).

“It was good to hear something refreshing coming from Nigeria. From that perspective we are indeed pleased that our children can actually distinguish themselves in such a global event,” he said.

Amangbo also said: “I want to assure you that for us in Zenith, technology is what we are known for. When it comes to supporting the younger ones, when it comes to initiatives like this, we are willing to partner with others like you to make ICT education accessible.

“Our own objective is to see how we can spread this to more children to have the opportunity not just in this part of the world but almost all over, and i believe that over time we can extend it to children outside Lagos, help the growth of ICT,” he added.

He promised the bank’s support for the planned enlargement of the competition to enable more students take part in the Nigerian competition and earn the chance to represent the country in future world championships.

The annual Microsoft Office Specialist World Championship is a global competition that tests students’ skills in Microsoft Word, Excel and PowerPoint. The 2017 MOSWC in versions 2013 and 2016 of the Microsoft programs was contested worldwide by about 1.1 million students from 140 countries. 157 students from 50 countries eventually qualified to compete in the world finals in Disneyland, California.

ReadAmana, which organises the Nigerian competition, has already declared its intention to enlarge the competition. “You know you will be able to stand and be able to do more things, it is a solid foundation in this ICT world because today, digital literacy is the language of the economy, so if you don’t know how to speak this language you are at a disadvantage, so we decided to start at the grassroots, work with the schools so that these children can have the right foundation and from there, they can move on to more advanced computer certification and knowledge,” Edna Agusto, Read Amana Chair had said when the team to this year’s championship returned to Nigeria on Saturday.

Agusto said the organisation intends to capitalise on the publicity that Katherine’s exploits at this year’s championship generated to get more schools to embrace the competition. She commended the bank for the long-standing partnership with her organisation and the reception organised for the Nigerian contingent at the Murtala International Airport, Lagos and the publicity that has attended the team’s success.

This year’s national competition was held over a period of 7 months between 1 August, 2016 and 30 April, 2017 with about 882 entries from 20 Secondary Schools in Lagos, Ogun, Rivers, Kwara States and the FCT. The competition ended with 112 out of the 161 students shortlisted for the national competition certified in Microsoft Excel, PowerPoint and Word.