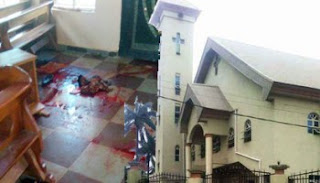 A lone gunman entered the Saint Philips Catholic Church in Ozubulu, Anambra State, emptied his cartridge, reloaded it and continued shooting before driving away in a waiting car, a witness has told
PREMIUM TIMES.

Charles Justice, who brought his wounded friends to the Nnamdi Azikiwe Teaching Hospital in Nnewi, said the incident happened after the homily at 6 a.m. Mass.

“Those who died are mostly children and the elderly, I know about three children who were below five years that died in the shooting,” said Mr. Justice.

Mr. Justice said three of the victims had died at the hospital, a claim corroborated by a medical doctor who did not want to be named.

PREMIUM TIMES learnt that more than 16 casualties are now in stable conditions while six had undergone surgeries successfully.

At least 11 people were killed in the Sunday morning shooting, according to the police, after the shooter opened fire at a crowd of worshippers attending the morning’s Mass at the church.

The police say preliminary investigation pointed to a feud between two individuals of the same community who reside outside the country.

“One of the individuals built the church where the shooting occurred; it is definitely not a terrorist attack in the mould of Boko Haram of Fulani herdsmen attack,” said Garba Umar, the state’s police commissioner.

On Sunday, security officials cordoned off the church as blood stains and bullets littered the premises. Villagers and sympathizers stood around discussing the incident in hushed tones.

At the Nnamdi Azikiwe Teaching Hospital in Nnewi were most of the victims were taken, people struggled to gain entrance through the heavily guarded gate. Over a dozen casualties lay in pools of their blood as they waited for emergency care.

Azuka Ejidike told PREMIUM TIMES he lost his father-in-law to the shooting.
Nearby, Nonso Nwakibe gave thanks to God as his mother, Antonia, lay groaning from the pains of the bullet wounds on her arm.

Ogochukwu Maduka, a Lay Reader at the church, said she had arrived for the Mass and found the church in darkness.

“After much effort to get the generator to work failed, they had resort to using candles and rechargeable lamps,” said Ms. Maduka who said she was at the front seat during the Mass.

“The holy Mass had proceeded as usual, after the first, second and gospel reading, and then the priest’s homily, as we stood up for the proclamation of faith, there was a sound of gun like thunder from behind.

“There was chaos and panic and confusion. The priest ran away as the gunshots continued and I took cover under the seat.

“When people started running around, the man began shooting upwards. Those mostly affected were those at the back of the church,” said Ms. Maduka who added that she counted about 15 corpses afterwards.

The Catholic Church has since confirmed that the priest survived the attack.
Nnagolum Oramidike, a primary three pupil, was shot in the leg.

He said he “bent down” while the shooting was going on. His mother, Chioma, who also sustained bullet wounds, said she was worried the news would devastate her husband, who had just travelled abroad to seek greener pastures, but hoped he would find out they were alive.

“The shooting started around 7 a.m. and my father in law was not so lucky,” said Mrs. Oramidike, 32, whose daughter was hit by a motorcycle amidst the chaos.

“I don’t know how to take care of my children now I’m incapacitated,” she added.

Ifeoma Onyeka sat beside her 14-year-old daughter who had just been operated upon. Her older, foster daughter, Anwurika Mboje, did not survive the incident – she had died right inside the church.

“I survived by taking shelter under the seat while the children must have started running because of lack of knowledge of what to do in such a circumstance,” she said.