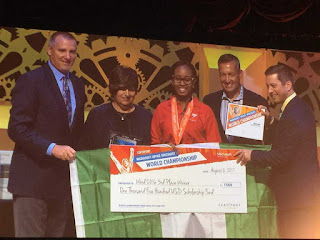 For her effort, sixteen year old Katherine, whose attendance at the competition was made possible by Zenith Bank, received $1,500, a NuVision Solo 10 Draw Tablet at the world championship and another N750,000 ReadManna Chairman’s Prize.

The annual Microsoft Office Specialist World Championship is a global competition that tests student’s skills in Microsoft Word, Excel and PowerPoint.
Apart from Katerine, four other Nigerian students represented Nigeria at the competition which is open to all students aged between 13 and 22 years enrolled in an academic institution.

The team was accompanied to the championship by an ICT Teacher from Glisten International Academy, Abuja, Stephen Adeyemi.

The 2017 MOSWC in versions 2013 and 2016 of the Microsoft programs was contested worldwide by about 1.1 million students from 140 countries. 157 students from 50 countries eventually qualified to compete in the world finals in Disneyland, California.

This year’s championship conducted annually by ReadManna in Nigeria was held over a period of 7 months between 1 August, 2016 and 30 April, 2017 with about 882 entries from 20 Secondary Schools in Lagos, Ogun, Rivers, Kwara States and the FCT.

The competition ended with 112 out of the 161 students shortlisted for the national competiiton certified in Microsoft Excel, PowerPoint and Word.