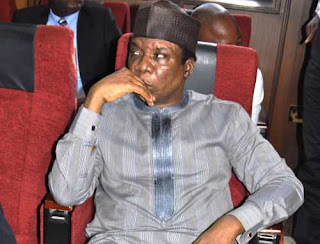 It's definitely not the very best of time for this rich colossus. We are too sure that if he had his way, he would have wished the avalanche of happenstances of recent would have befallen an enemy rather than himself.

All of the staggering revelations have been
totally embarrassing, to say the least. It has been one battle after the other for him, his companies and some of the people connected to him. These battles as they are, are all coming from all sides of the world. And as it seems now, there are no signs they are abating any time soon.

As we speak now, his current travail is coming from his friend's bank, that is Skye Bank PLC, where Tokunbo Abiru, him being the former ED at First Bank PLC (where Omokore is also said to have gotten another ₦120 billion unresponsive loan) is now the GMD/CEO of Skye Bank PLC. Jide Omokore's current quagmire arose from the "₦110 billion unresponsive loan", he had gotten from the bank which has Lagos State Government of Nigeria as the highest shareholder.

The chairman of SPOG petrochemicals amongst several other companies had gotten the loans via 3 of his business concerns namely, Atlantic Energy Drilling Concepts-₦56 billion, Cedar Oil and Gas Ltd- ₦22.4 billion and Real Bank Ltd- ₦31 billion. More after the break.

Skye Bank claims that the repayment of the first 2 obligations are tied to the controversial Strategic Alliance Agreements (SAAs) signed with the NNPC. Atlantic Energy had gotten an SAAs via a subsidiary of NNPC, namely NPDC to finance and develop oil productions from 4 oil blocks, namely OMLs 26, 30, 34 & 42, six years ago in 2011 to be precise. The NPDC stake in those oil wells is valued at $1.8 billion.

The EFCC under Magu had since frozen the assets of Mr. BabaJide Omokore under the suspicion of money laundering and procrument fraud.

Skye Bank in a letter addressed to the FG, under the acting President, Prof. Yemi Osinbajo, has appealed that it be granted the access to those assets funded by the loans from the bank.

Meaning that if the access is given, those 4 oil well would fall under the jurisdiction of Skye Bank in the bid to recover their money. According to the letter. "We will require assistance for the extrication of real estate assets that were fully funded with loans from the bank from the assets of Omokore presently under the forfeiture order from the court". Says the letter.

The letter continues "This will enable us have access and rights over these assets and put the bank in a position to realise the assets that form the collateral for the loan granted to Real Bank Limited. We will require some political intervention working with the NNPC to be able to bring this matter relating to Atlantic Energy to a quick resolution. The assets belongs to the NNPC and we will require the NNPC to approve the transfer of the rights under the SAAs to another company that can take over the obligations and repay the bank facilities. Our proposal is to work with the NNPC to take over these assets (since NNPC is a joint venture partner with 60% stake) and thereafter re-auction them.

"This arrangement will also require strong Political support at the highest levels. The positive outcome of this arrangement will enable the bank to repay NNPC's TSA funds totalling USD $262 7M, and also part of CBN's financial accommodation to the bank".
Posted by MAN ABOUT TOWN at 10:01 AM