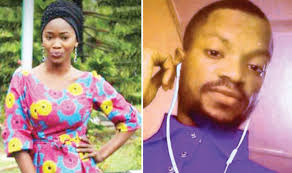 The daughter of Alhaji Lasisi Oluboyo, a former deputy governor of Ondo State, has allegedly been found dead in her boyfriend’s room.
According to a source,
Adenike Oluboyo was found dead in the room of her man, Adeyemi Alao, in the Oke Aro area of Akure, the Ondo State capital.

Adenike was said to be a student of the Adekunle Ajasin University, Akungba Akoko, Ondo State.
The source said the young woman had been declared missing for the past six days before her lifeless body was found under a bed in the room of the suspect.
He said, “The young woman has been missing for some days, but no one knew that she was dead and her body was in her boyfriend’s house in Akure.
“It was Adeyemi’s brother that entered the room where the lifeless body of the lady was kept and saw it under the bed.  Adeyemi later reported the matter at a police station.”
The source added that the boyfriend had been arrested by the state police command.
Another source told our correspondent that there had been an insinuation that the death of the former deputy governor’s daughter might be more than it seemed.
When contacted on the matter, the Police Public Relations Officer in the state, Mr Femi Joseph, confirmed the incident and said some suspects had been arrested in connection with the death of the undergraduate.
He, however, did not mention if the deceased’s boyfriend was among the arrested suspects.
“I can confirm to you that the incident happened and we have arrested some suspects, but the Commissioner of Police, Mr Gbenga Adeyanju, will address the press on the matter in the next 48 hours. I can’t say more than that for now,” Joseph added.